After a few days off and a few more days lunging it was time to get back in the saddle.  The lunging had gone pretty well – Galahad was starting to track up nicely and even Cookster was going forward for once.

It was good to be riding again and both ponies were very well behaved.  We had a lovely, gentle hack just pootling around the lanes – it was wonderful.  More importantly,  Galahad felt much freer in his stride and seemed to be working better.

On our way home we rode through a field which has sprouted clover flowers everywhere.   It was beautiful!

I mentioned last week that the ponies had arrived home.  I did not say that we had an exciting time when they got here.  They travelled beautifully but when we unloaded them I was given a strict lesson in the importance of wearing gloves.

Obviously, I know gloves are important but there are always times when we let the rules slide a bit.  This was one of those times.  Sadly, Cookster decided that it was the perfect time to charge out of the trailer, barging me out of the way.  I couldn’t hold him and was given a lovely rope burn for trying.

My instructor couldn’t hold Galahad either and they both took advantage of their freedom – there was a lot of yummy grass!  Luckily we had been sensible enough to make sure they couldn’t get onto the road so they were perfectly safe.  I will definitely be wearing gloves next time though! 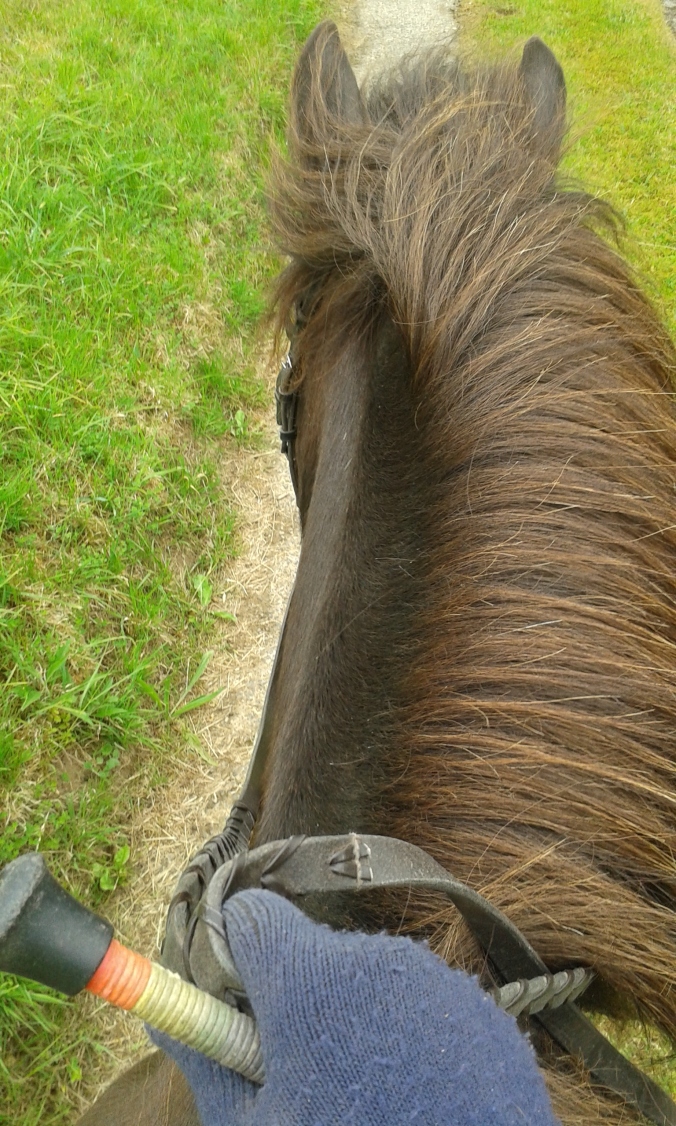 While the ponies were away I did a bit of riding and leading with them.

This isn’t something I do often.  For one thing, the hills at home are pretty steep and I do worry that the ponies will wind each other up, especially if we meet any traffic.  However, I have less time at my disposal when the ponies are away and I knew that other people were riding and leading them with no issue at all.

I needn’t have worried either.  The only problem I had was that when we pulled over for cars it was very difficult to stop Cookster (being led) eating and that seemed like a minor problem.  We even managed to ride past a huge car transporter  (not something we usually see!)  barely rushing at all.  I actually very much enjoyed my time with them both.

On Wednesday both ponies had their backs checked.  Galahad  – as usual – needed the full treatment so he now has lovely patches of dry gel stuck to him.

It also means he needs a few days off which I’m sure he will not mind at all.

Cookster just needed a checkup but he has lost a bit of topline muscle so both ponies will be getting some lunging over the next few weeks!  Galahad will be fine but I find it very difficult to keep Cookster going forward on the lunge.

Since Galahad needed the time off both ponies are now home which is lovely.  They certainly look like they are enjoying their free time!

One of the exciting things about the ponies being away is that I get a locker in the tack room.

Obviously I have a whole tack room at home but I’ve never had a locker away from home before.  It might seem like a little thing but it makes me very happy.  If nothing else, it is a lot better than keeping my stuff in my car!

I think the ponies are enjoying themselves too.

For one thing, they don’t get treats like this at home very often! 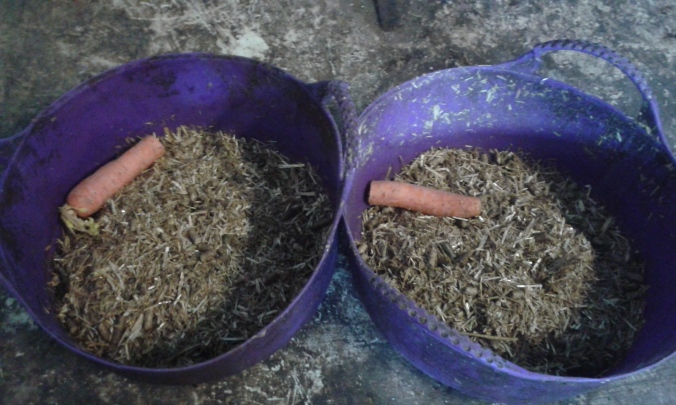 Tuesday was a very windy day.

I schooled both the ponies after work and I was concerned that Galahad would be completely wound up, especially as I had just ridden Cookster and our steering left a little to be desired!

Galahad though was surprisingly relaxed and we had a pretty good session.  He has sometimes been a little nappy towards the gate lately but we had no trouble this time. 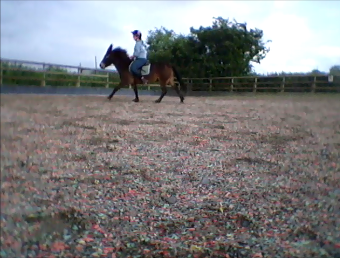 We even managed to work in an outline – of course, I didn’t get that on camera!  He is perhaps not using his hindquarters as much as I would like but we can work on that.  Both ponies will be having their backs checked this week as well, so we can make sure everything is okay.

Overall though, I was very pleased with Galahad and how relaxed he was considering the weather.

On Sunday I went to our local hunter trials.  We were a bit doubtful whether I was ready but I don’t get many opportunities to do cross country and I want to make the most of the ones I do get.  This time I tried riding Galahad in a kimblewick – we had some steering issues last time!

I was very pleased with how relaxed he felt in the warm up.  He can get a bit wound up and bouncy but this time he was listening very nicely and I had no worries.  The grass was a little slippery but wasn’t too bad and I was pretty happy setting out. 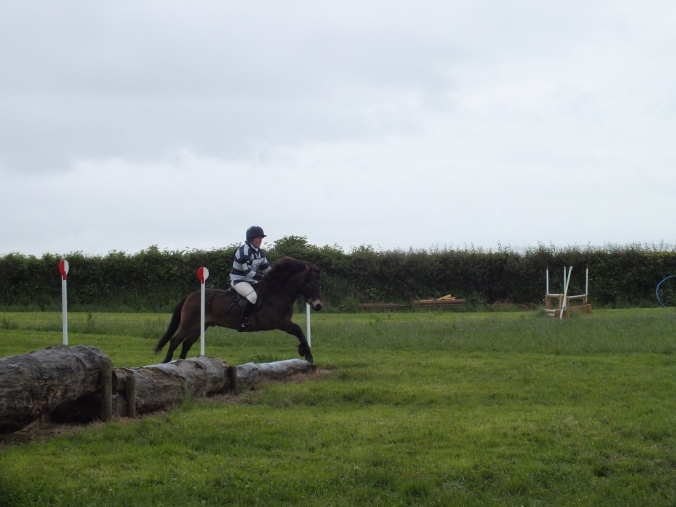 That changed rather quickly.  We had an awful lot of refusals which is quite unusual  – Galahad is far more likely to run out than stop dead.  I think he was worried about the new jumps and after my few weeks off my legs just weren’t strong enough to keep him going.

The course was set out over two fields and we refused at least once at most of the fences in the first field.  At the chair we even slipped and very nearly fell but just managed to hang on.  The fence judge made us skip that fence!  At the next fence I had a friendly helper who stood to the side to encourage Galahad over and after that we did a lot better, with only a couple of stops in the second field.

By this point I knew that I wasn’t really fit enough to ride as positively as Galahad needed.  I was also coughing quite a lot between fences – thankfully not very much when we were actually tackling a fence.  I’m pretty sure the adrenaline controls it a bit!  It was a good experience though and I hadn’t expected to be competitive anyway.

I also had a pairs class in the afternoon.  My partner was riding a very green horse but he had been jumping better than us so I was hoping for a bit of a lead from them.  I was not disappointed!  We flew round most of the course, with just a little trouble coming out of the quarry – a fence we had not had to tackle individually.  We even managed our dressing fences very nicely. 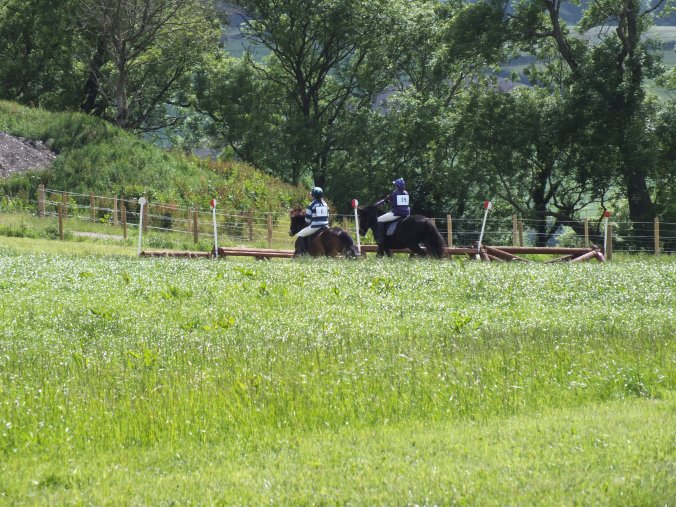 Galahad and I were responsible for getting into and through the water as our partner had been having issues with that.  I was a little worried but Galahad popped straight over the fence and into the water with no trouble.  Sadly our partners managed to go over the flag instead of inside and as we didn’t go back to correct it we were eliminated.  Still, we had a fantastic round and Galahad was definitely enjoying himself.   He was much more forward than he had been in our individual round! 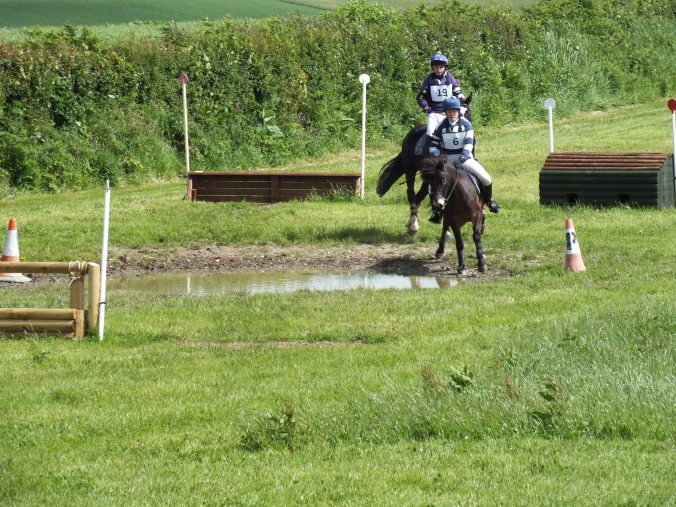 I went with the others to check the results at the end of the day but I was obviously not expecting anything for myself – we had clearly been eliminated in both our classes!  However,  so had quite a few other people and the riding club was nice enough to present rosettes to us anyway – the later in the course we were eliminated, the higher we placed.  Galahad and I managed a fifth in our individual class and a ninth in the pairs.

The rosettes were completely unexpected but very welcome indeed.  We may not have had the best of days overall but our pairs round was wonderful and I think we learnt a lot.  I was very glad I decided to go.

It turns out that I am not quite so recovered as I thought I was.

I was so thrilled to be riding again that I went a bit mad.  My sister and I went for a lovely hack on Monday, then I schooled both ponies after work on Tuesday.  I thought I was doing fine but on Wednesday I was utterly exhausted and riding just did not seem like a good idea.

The trouble is that for the last three weeks I have spent almost every moment not at work asleep.  Although I am much better I just do not appear to be ready to ride as much as normal.  Or if I did I would in all likelihood slow down my recovery even more.  I  just have to accept that I need to ration my riding time.

It is hard though.  The ponies went away to give me a chance to recover but now I have done that to some extent I want to make the most of the facilities whilst they are there.  That’s just common sense.  I suppose though that taking days off to recover now will mean I get to ride more much sooner.  That’s what I need to think about!