The weather this morning was rather nice but we wasted it as my sister was making a trifle and I curled up with a book.  By the time we got out to ride it was pouring with rain so we dragged on all of our waterproofs.

Naturally, it stopped raining as soon as we were tacked up and ready to ride – I’m sure that if we had decided against waterproofs the rain would have got worse!  However, at least it meant that we had a lovely, dry ride out.

We had a great time and I think the ponies enjoyed it too despite our making them splash through the puddles.

The only downside was that Galahad thought the perfect place to stop for a poo was right outside our neighbours’ house.  I got off to clear it into the hedge and they came out of the house just as I was doing so.  We had a nice chat and I don’t think they realised what I was doing… They didn’t mention it anyway!

We had some chores to do outside and just as we got back indoors the heavens opened again.  We timed our outing perfectly!

We have been having a lovely, quiet Christmas.

We went out for a hack on Christmas Eve and again came to carol sing at our own front door.  The ponies got more apples and I think would have quite liked to come in! 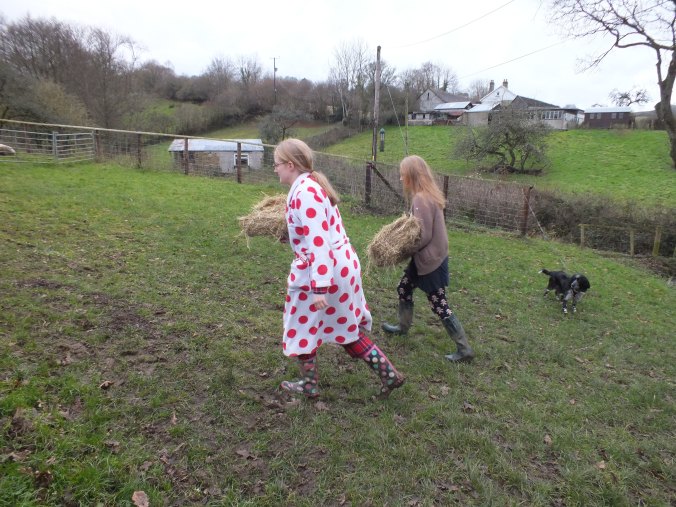 On Christmas morning we have always gone out to see the ponies still in pyjamas.  They have got pretty well used to odd clothing now and were very pleased wih the yummy treats they got! 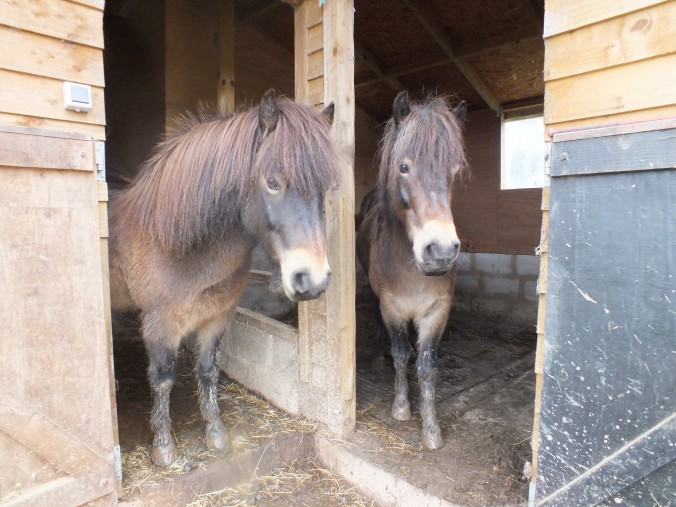 I have been working since Christmas day so no riding for me but Cookster and my sister went on the traditional Boxing Day walk and by all accounts very much enjoyed it.

It has been a lovely few days.

On Friday we made our annual Pony Post excursion.

When I was a child I once rode out with my instructor’s daughter to deliver their Christmas cards and it seemed so wonderful that I have always been determined to do the same with our ponies. 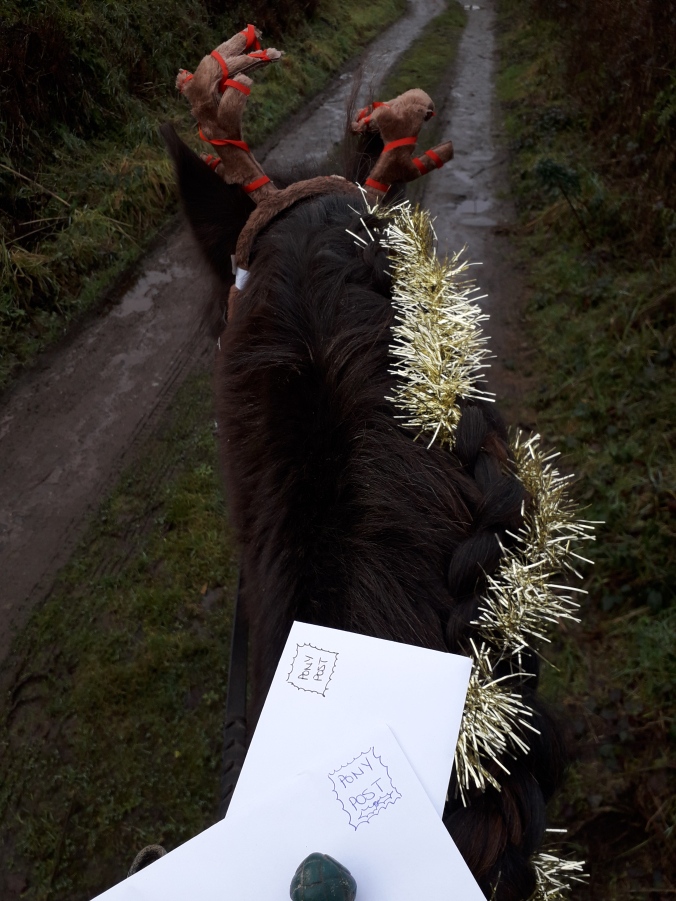 The tack is still mostly decorated from the tinsel ride so we were very festive again.

We didn’t actually meet anyone on our rounds but when we got home we went carol singing at our own front door and the ponies were rewarded with apples.  We had a lovely time.

On Monday my sister and I took the ponies on our instructor’s annual tinsel ride. It has been so long since I have actually been able to go with the group instead of having my own private ride and I had a wonderful time. 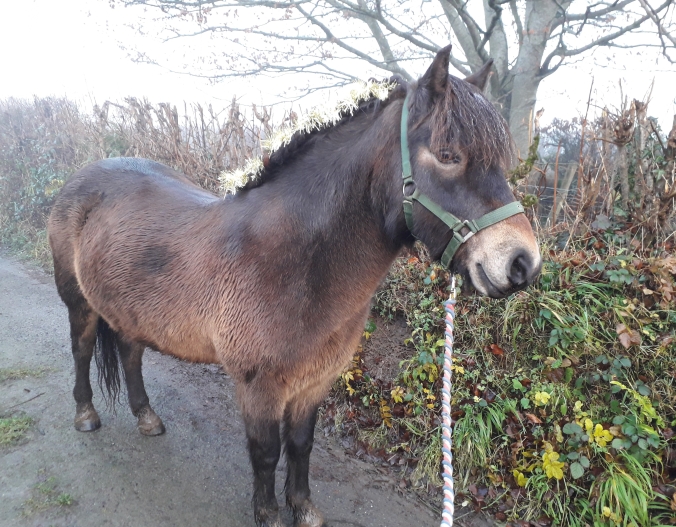 Waiting for our lift!

We could not have asked for better weather.  The sun was shining and we all got rather warm.  One of the valleys was full of mist and the views were absolutely beautiful. 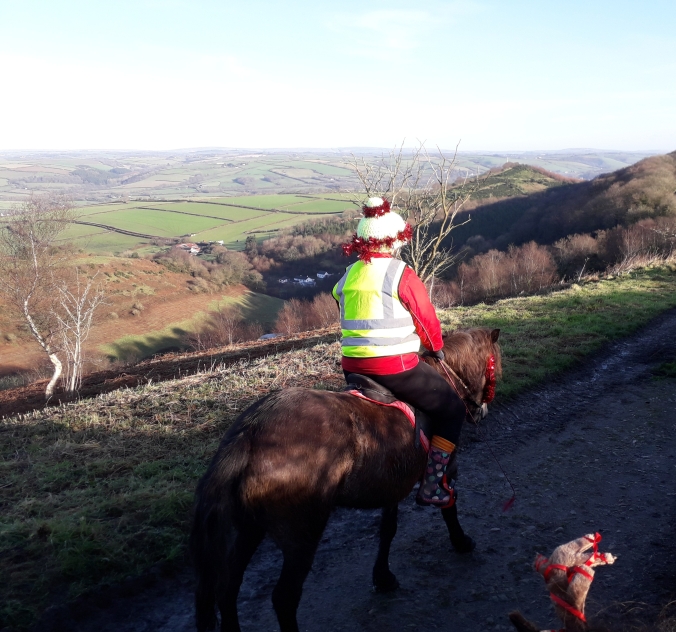 I was a little concerned about the ponies’ fitness levels for a long ride (four hours!) but they actually kept up pretty well.  They even had rather too much energy in a couple of places where they shied spectacularly and barged into other ponies.   We were fine but I am always terrified of making a small child fall off.

In fact, the only issue we had was that Galahad felt a little footsore on some of the stonier tracks – he pretty much dragged me through a hedge at one point so my knee is a mess of bramble scratches.  I expect Cookster to be footsore sometimes but it is most unusual for Galahad. 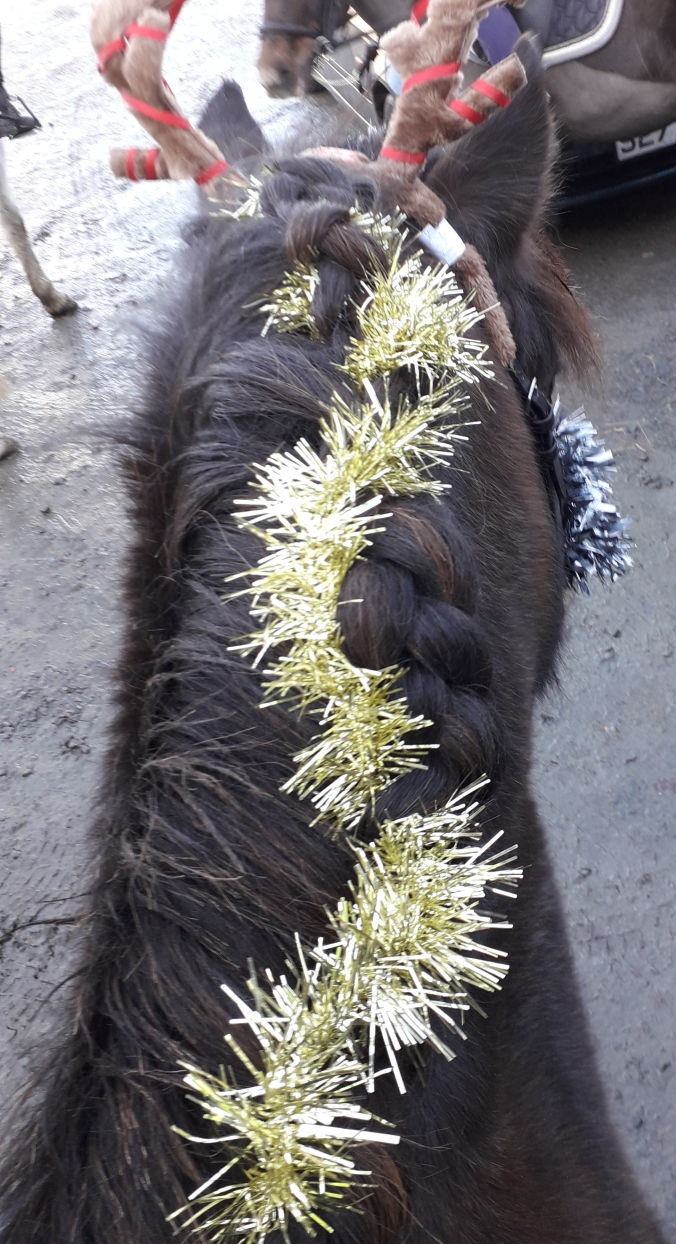 My sister also came away wounded – she banged her knee on a fence post at a gallop. She has an impressive bruise!

At one point we took a shortcut to avoid some particularly stony tracks and began walking down the grassy gallop to meet the others  half way.  Of course, they could not pull up so rushed past us but I was so proud of our ponies as they didn’t whip round and take off – we were very much in control.

I had a wonderful day and even came away with a lucky dip Christmas present. I am not a proper grown up yet!

I recently treated Galahad  (or myself) to a new bridle.  His old one was right on the bottom hole on most of the straps and I have been wanting to change the black leather for brown for some time.

I love visiting the tack shop and it is so good to have really nice leather to bring home.  When I  bought Cookster’s martingale it was so lovely that I knew I would have to get the same quality for myself.

I haven’t managed to get a decent picture of the bridle yet – the first time I used it we rode in a downpour and the next time I had already started decorating for Christmas! 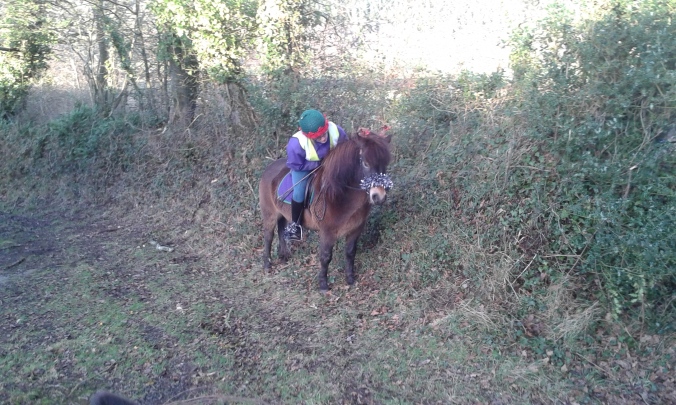 I am so pleased with it though and it was definitely worth the wait.

Whilst the rest of the country seems to be knee deep in snow we have had a veritable downpour.

When I got up on Sunday morning the rain was lashing down and it was blowing a gale.  It was not ideal riding weather but I had to go out so any riding had to be done then or never.  The field was in a terrible state!

As it happened, the rain eased off slightly while we were riding so we were well rewarded for taking the plunge!

I was out for the afternoon and during that time the rain got worse.  There was water flowing out of the drystone walls around our yard and the stream rose alarmingly.

As I was out my Mum left a marker stone to show me how far it had come.  The gates had to be opened because there was a lot of debris building up against them. 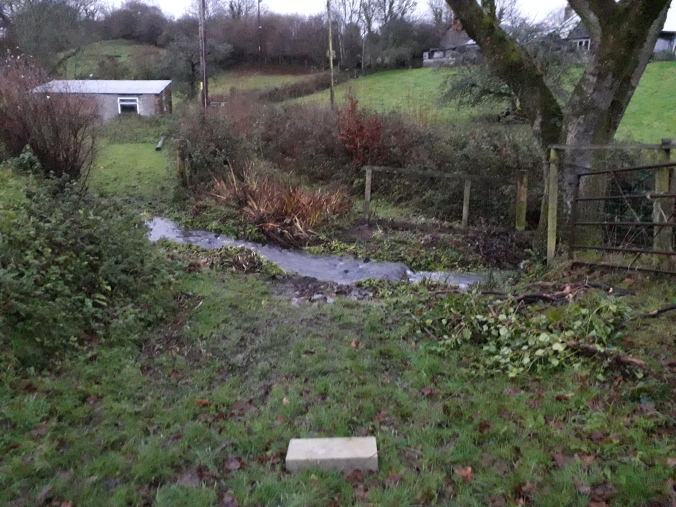 The water levels went down again surprisingly quickly but the fields are still sodden.  There will be no riding on them for a while!

Things have been a little hectic here recently.  I do get very busy in the run up to Christmas but this week does seem to have been particularly busy.  Therefore, it was especially nice to have a pootle round the lanes with the ponies this weekend.

It has been very cold for the last couple of days but there was no rain so we had a lovely, relaxing time.  I was very proud of Cookster for not batting an eyelid when a pheasant flew up very noisily right next to us – even though I jumped out of my skin!

Galahad also made me proud – we had to squeeze through a narrow gap between the hedge and a car with an open boot and the hazard warning lights flashing.  He did hesitate but when I asked him to move forwards he did so.  He rather wanted to rush through but managed to contain himself. 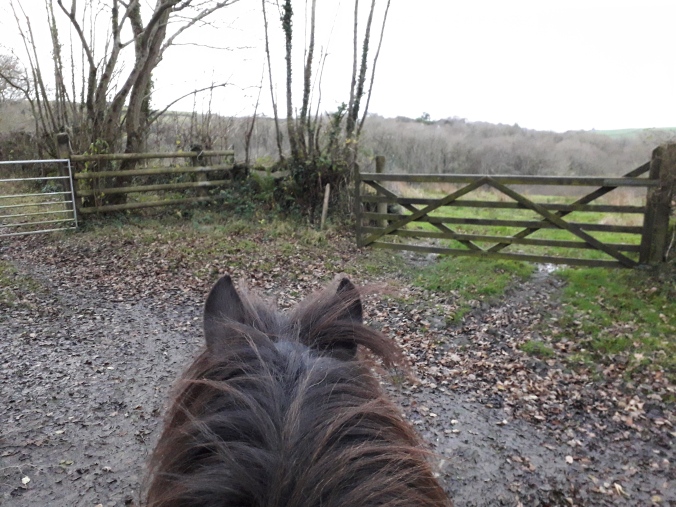 There are beginning to be a few signs that Christmas is coming.

Galahad may have wanted to eat the wreath!

I have written before about the dressage tests Galahad and I did for BHS Somerset’s online competition over the summer.  As we had two scores over 64% we qualified for the championship in October – quite an achievement for us!

I  was very aware that the main comments we had for our previous tests were that Galahad needed to be more forward so I was really focusing on that for this test.  I struggled to get him bending to the right but at least he wasn’t feeling sluggish.   In fact, he felt far too rushed from on top.

When I watched the film back, however, it didn’t look rushed at all – clearly I have got too used to Galahad’s usual pace so that the right energy feels too much!

My score sheet just came through along with a lovely rosette and the best score we have ever received.  We actually got the same score as the rider in fourth place but didn’t do so well in the collective marks.

We got some wonderful comments from the judge and it was a great way to end the season.  We will definitely be taking part again next year!

This morning we went to our local fatstock show.  I love to go every year but this time there seemed to be even more horses there than normal.

First of all we saw a pair of shire horses giving rides on a rather nice farm cart.

A little way on we found a stand belonging to the Exmoor Pony Society who had a pen with a couple of ponies – a yearling and two year old.  It was great to say hello to them. 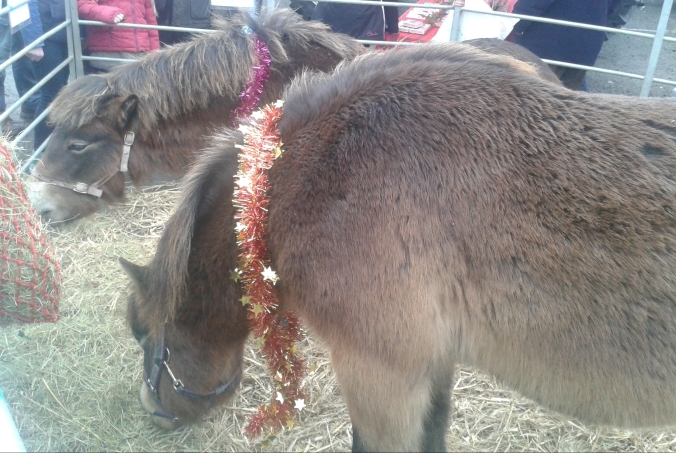 Inside the pannier market there were some festive donkeys who were very friendly.

Then we found we had another opportunity for a horse and cart ride! 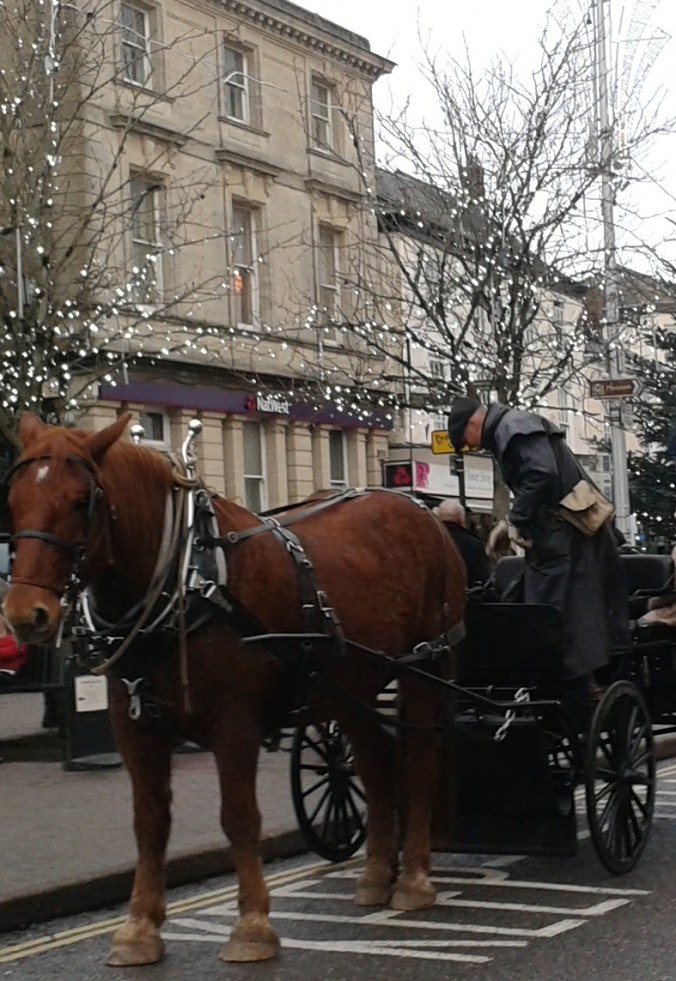 The highlight though was the farriery demonstration.  They were making the shoes from scratch which is something I have never seen before.  I found it fascinating and I stood watching them for ages!

It is a lovely local show with a fantastic atmosphere and I had a great day, even though it meant I didn’t get to ride my own pony.