Even though it has been very hot over the past few days there are definitely signs that autumn is on its way.  There is a very specific feeling in the air which always says autumn to me and that has been around for a while.

On Monday morning I rode early before work.  It was very misty in the valley but once I got up the hill a little way it was bright sunshine and there was a beautiful view over the mist.

There are also a lot of toadstools around at the moment.  There have been a huge number over the whole summer but now there are even more.  They are just so beautiful!

This weekend I will be at Burghley Horse Trials so I won’t be blogging on Sunday.   I have never been before so I am very much looking forward to it!

I recently took Galahad for a spin in my neighbour’s fields and for the first time I tried riding him there in a kimblewick.   He can be inclined to take off a bit in the field  – he certainly enjoys going fast – and I wanted to try the kimblewick to see if it would help me maintain a little bit more control. 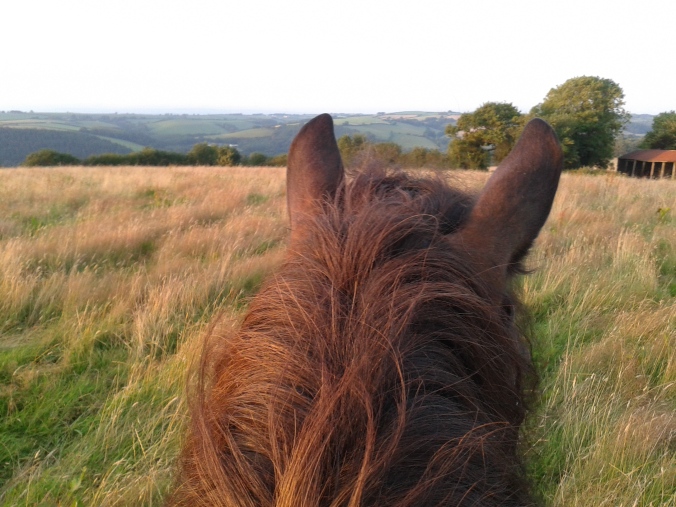 It definitely seemed to work.  I kept to a walk far longer than I normally would and although he was obviously keen to go found it very easy to keep him walking.  We then trotted for a bit before breaking into a canter.

Again,  it was much easier than usual to keep to a steady canter.  When I finally let Galahad gallop he was more than ready to go and we sped across the field.  Crucially though, he was no trouble at all to pull up again.

The main thing was that at no point did I feel he was going to take off and I would be unable to stop.  I felt perfectly safe and it was definitely a successful experiment.

With Galahad’s cheekpiece broken I had to come up with a solution to be able to ride him until I could replace it.  Cookster’s bridle is too long but I discovered that I could use Cookster’s cheekpieces on Galahad’s bridle and with a little adjustment it would fit both ponies.

That was really helpful but I also needed something that would allow them both to be ridden at the same time.  I was a bit stumped for a while until I remembered that when we first introduced the ponies to the bit we used some connectors to attach it to their headcollar.

I fished them out and tried it – luckily I could still make it fit. 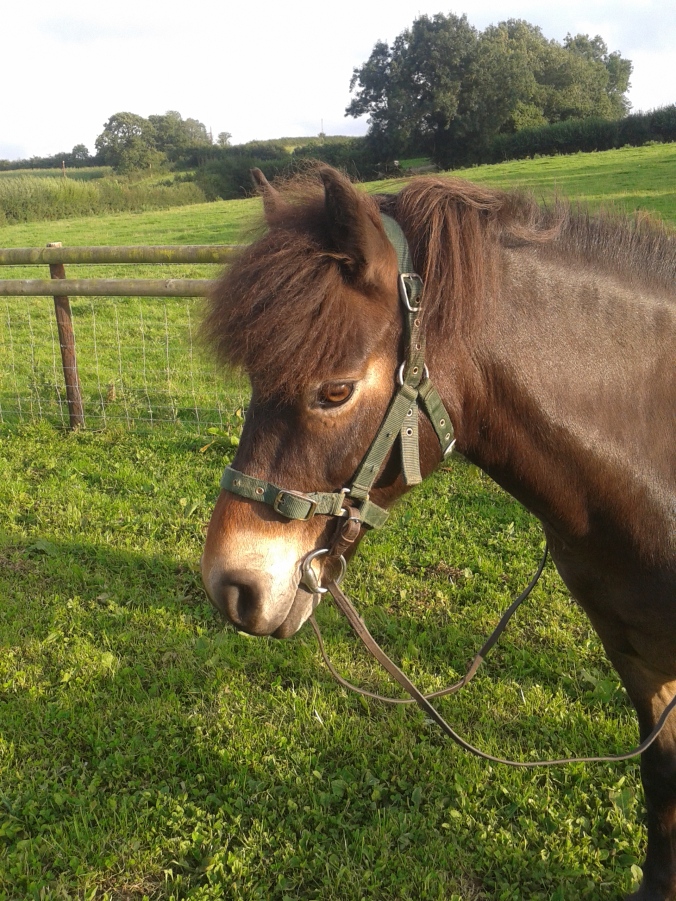 I tried a little schooling before risking going out on the roads and I was surprised by how well Galahad went.  I thought we might have a few braking issues but I needn’t have worried – Galahad was under perfect control and we even managed a little jumping.

In the end I never needed to use the headcollar on a hack but it is good to know that I have it as a backup if necessary.

Since Galahad had his back check in June I have been making more of an effort with his groundwork.  This is something I know we need to do to keep him using his hindquarters properly but it is so easy just to ride him instead.

I am very pleased with the way he is moving at the moment – his hind legs are stepping through nicely.  He is also making a fan of poles look relatively easy.  I have been using some sidereins on him to encourage a fairly low head carriage but I have kept them pretty loose so I’m not sure they are actually having any effect.

It turns out they were probably too loose.  The grass is fairly lush in the schooling field at the moment so Galahad wanted to stop for a snack.   I moved to encourage him forward, he took a step, stood on the side rein and broke his cheekpiece.

For the rest of our session I fashioned a temporary fix using his noseband but that is obviously not a long term solution and I will have to go shopping – I don’t have any spares! On the bright side though, he still went very nicely just in the noseband.  He is a good pony really.

Last month I decided it was about time I entered an online dressage competition.  I have been meaning to do so for ages and I was given the arena markers way back in March.

I picked the event run by BHS Somerset but didn’t manage to film my test until the day before the deadline.  In fact it was the evening before, the light was fading fast and the camera really struggled with the dark – it kept going in and out of focus.  I wasn’t overly happy with the test – Galahad felt very sluggish – and I was debating whether to film again the next day.  However,  I wasn’t quite sure whether entering before the deadline meant entries on the day would count or not.  I decided to just enter and hope for the best.

At 11.30pm I set the video to upload but I had forgotten how long that would take.  I  sat up as long as I could but in the end I had to give up and go to bed.  It was just as well – it finally finished at about seven the next morning!

I had almost forgotten about it when last week this wonderful parcel arrived.

I thought the judge was very kind to us and I love what she said about Galahad at the end.  Most of her comments were about needing to get him going forward more which I would definitely agree with!

It was a great experience and I will be entering again next month.   I will try to be more organised next time though!

For Galahad and I this week has been bookended by interesting rides.

On Monday we went for a hack and had to navigate a pretty narrow gateway.  I knew my right knee was going to get knocked so I steered to the left and we cannoned into that gatepost instead.  That’s something Galahad has always found frightening so we charged off across the field until I could pull up.  We must have looked hilarious!

Then on Friday we set out to do a little schooling.  The field was full of my dog’s agility equipment and as I knew I would be using it again soon I was reluctant to pack it away.  Instead we fitted our schooling around it. 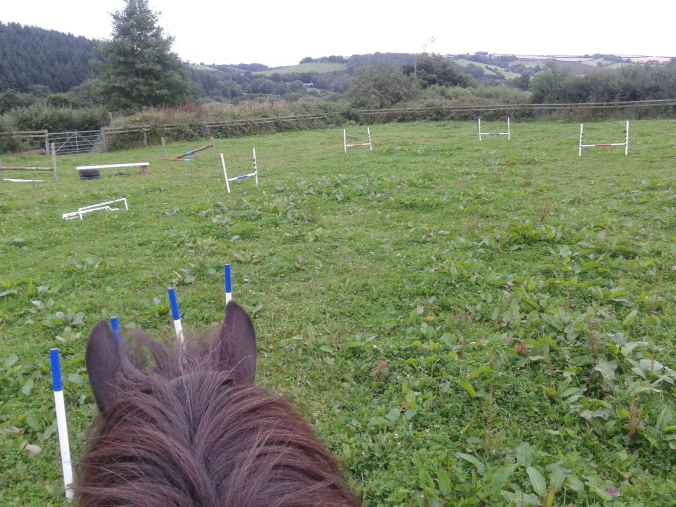 It was actually surprisingly easy to do and it also gave us a lot of obstacles to use in practising neck reining.  We had great fun!

The highlight of our week though was Thursday.  I had made sure I got up early enough for a hack before work and I was definitely rewarded for doing so.  The sky was the most amazing blue and everything was looking particularly beautiful.   We had a wonderful, relaxed hack and it was the best start to the day. 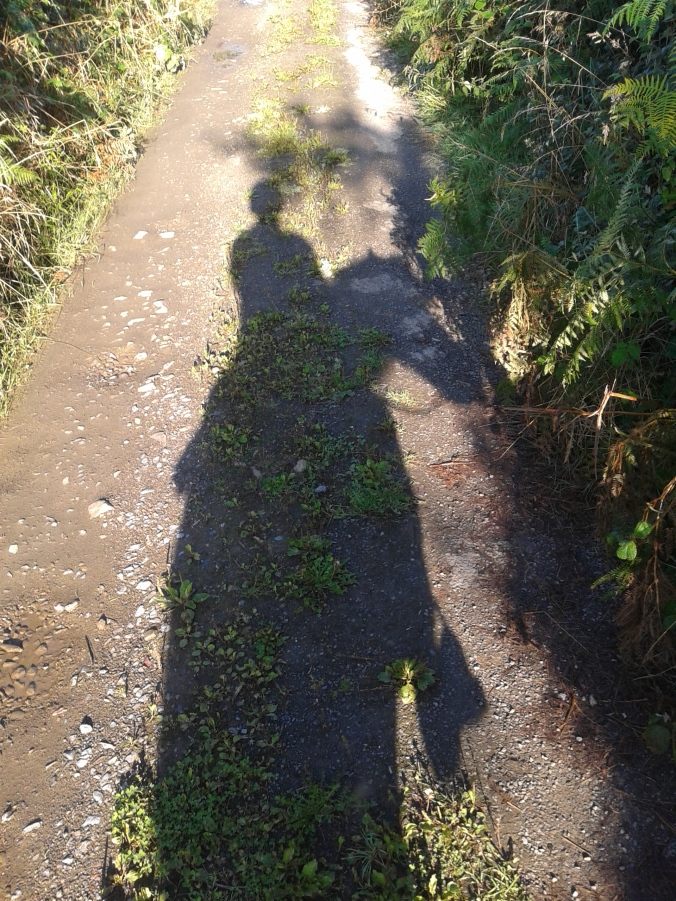 The ponies have been a bit neglected today.

Instead of riding I have spent the day at the Exford Show.  I love this show and even though it rained all morning I still had a great day.  The Exmoor breed show is held here but this year for the first time Exmoors were also allowed in the main ring’s mountain and moorland classes.  It was very exciting to see an Exmoor win! 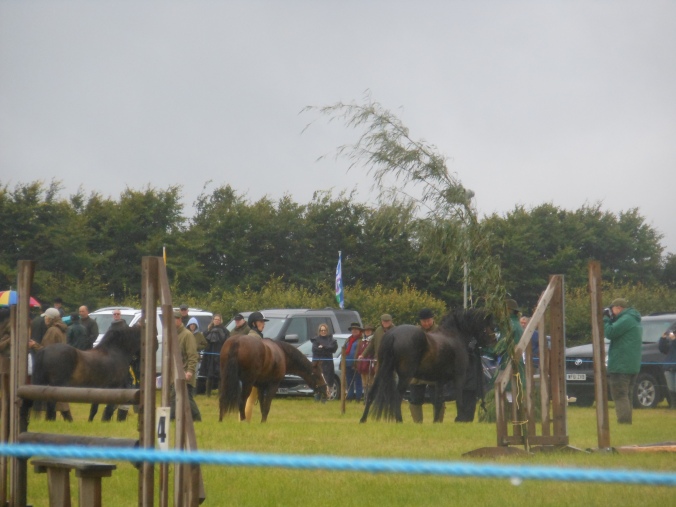 It was also good to see the Exmoor classes themselves.  I love seeing how many different colours there are within such a strict breed standard. 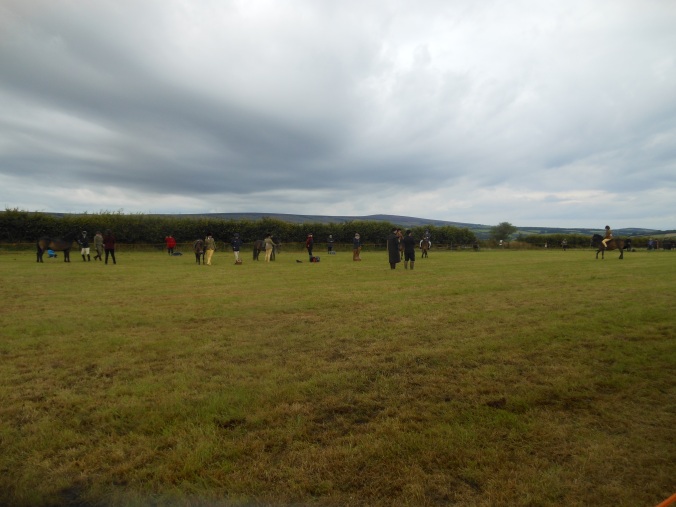 I also loved the fact that I had what must be the prettiest picnic I have ever seen! 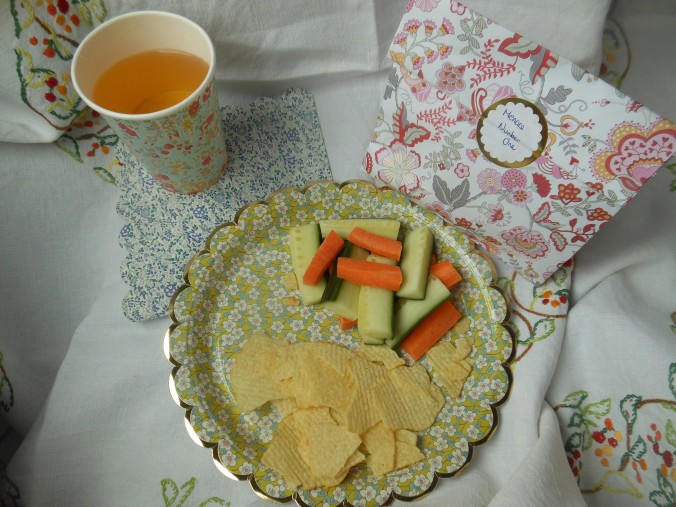 I so much enjoy just wandering around the show and I may have bought myself some things.  I love horsey shopping and I don’t get the opportunity all that often!