Yesterday I was planning to ride after work but the USEF Network was for the first time streaming the Land Rover Kentucky Horse Trials worldwide and I couldn’t pass up the opportunity to watch the cross country! 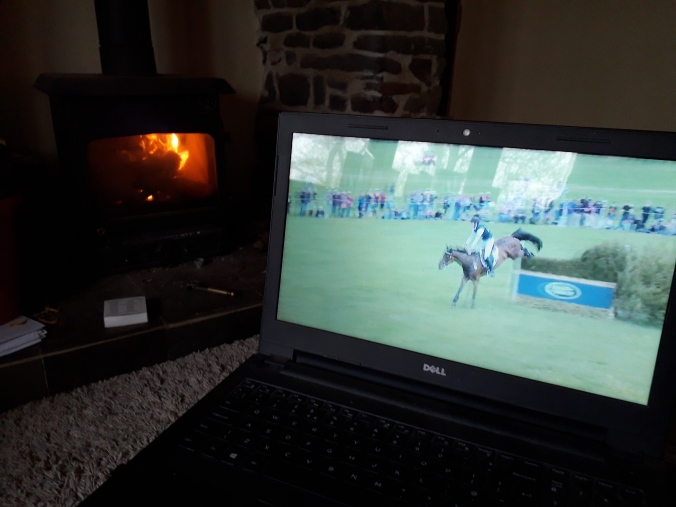 Unfortunately we had internet issues and we ended up having to watch most of it on my phone.  It was still great though.

By the time it finished is was getting dark and riding was out.

Today being Sunday I finished work earlier and, as the showjumping started later than the cross country, I had time for a quick hack with Galahad.

We had a lovely time and I did get back in time for most of the showjumping.  I didn’t just sit and watch it though – Galahad had almost torn one ear off of his fly mask so I was busy mending that.

The showjumping was so exciting – the scores of the top riders were incredibly close – and it was fantastic to watch.  Obviously it helped a lot that Britain had Oliver Townend in very strong contention and eventually winning.  He now has two legs of the Rolex Grand Slam and Badminton will be very exciting next weekend.

Galahad has had some time off this week as I am just back from a couple of days in Surrey.  I had a lovely time pottering about and found a simply wonderful bridlepath.

I would love to have that a little nearer to home!

I came back home to some very good news.  Firstly, the grass is starting to grow. 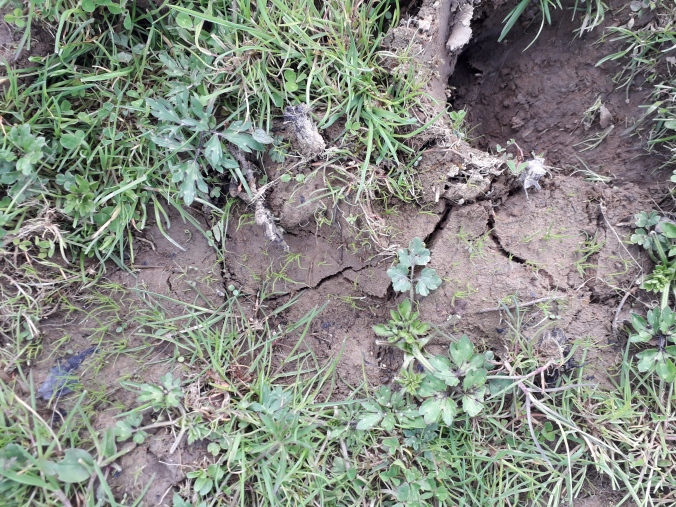 It’s a bit hard to see in the picture but I promise it is sprouting!

Secondly, the field is finally dry enough to school in.  It is still a little soggy down one end so we have to be careful but today I managed to school both ponies and Cookster and I even had a little jump.

I didn’t jump Galahad – instead we did some semi cross country training.  We went up and down pretty steep hills in a different field and splashed in and out of the stream.

I had a thouroughly good time and I think Galahad enjoyed himself too.

I had been very much looking forward to the publication of Charlotte Dujardin’s autobiography The Girl on the Dancing Horse so I was thrilled to receive a copy from the publishers.

Most people with an interest in horses will think they know Dujardin’s story but this book shares many moments I had not read before and every time I had to put it down I was kept wanting to read more.  It is very well written with lots of anecdotes and plenty of humour – things that I need from a biography. 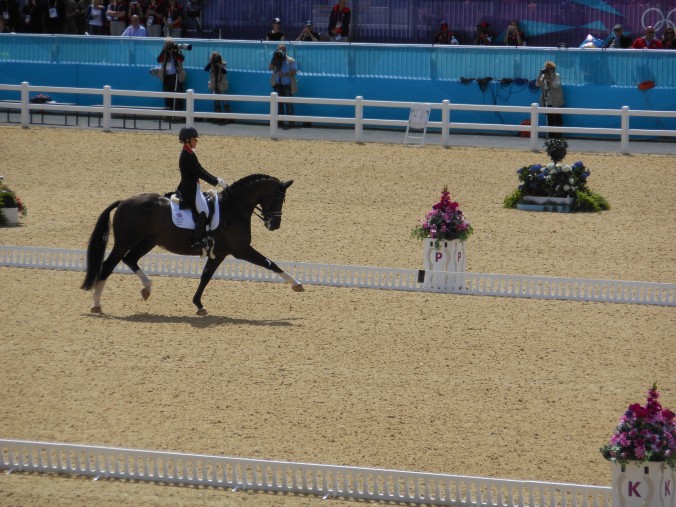 Dujardin gets her emotions across well too.  I was lucky enough to get tickets to the second day of grand prix at London 2012 so I saw her ride there.  The atmosphere was incredible and I have never been anywhere that felt remotely like it.  Reading about it again genuinely brought a tear to my eye and when I got to the chapter about Valegro’s retirement I was properly crying.

The book also looks forward though.  I loved reading about Dujardin’s younger horses and her plans for the future and I can’t wait to see what she does next.

This is a book which should be on any equestrian’s bookshelf.  If nothing else, you come away with a very positive message – anything is possible if you want it enough and work hard enough.  That is something we all need to know.

On Sunday I wrote a nice, positive post about the arrival of spring.  Then I went out for a ride with my sister.

As I mentioned in that post, I have been riding in short boots with no coat and I didn’t see any reason to change that on Sunday.  Naturally, within about five minutes it was pouring with rain.  We got so wet!

The sound in the video is mostly from the hundreds of tiny pebbles being washed down the hill.

On the bright side, Galahad wanted very much to turn away from the rain and we got some lovely lateral work out of it.  It was much better before we started filming of course.

Naturally I am sat writing this on Wednesday evening – after the springiest of spring days.  Perhaps this is the end of the rain! 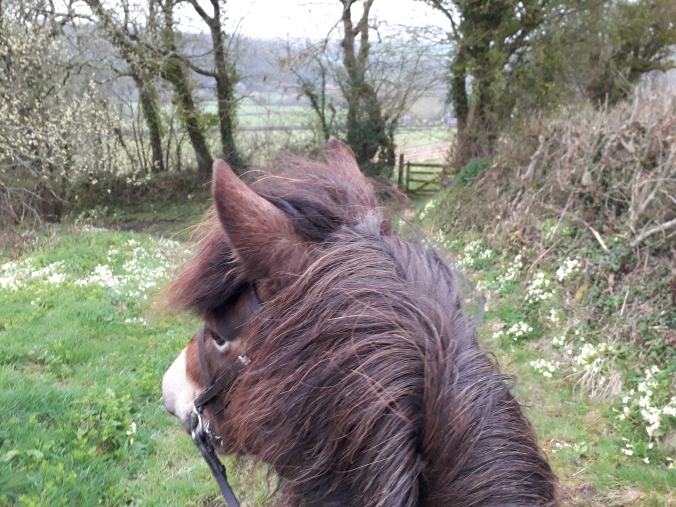 I think that spring can definitely be said to be here.  We have had some beautiful days this week – the sun has been shining and things are beginning to blossom.

I’ve talked about the primroses before but it is a really good year for them! 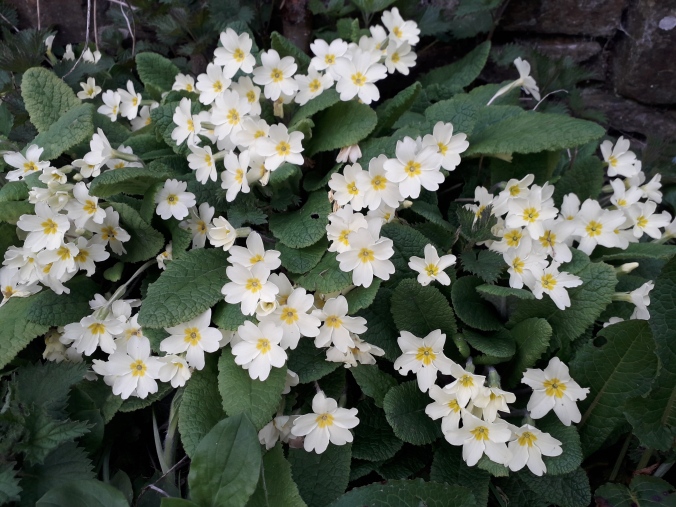 I have been routinely riding without a coat and have even brought my short boots out from their winter retirement.  It has been a lovely week.

There is a downside though – the flies are suddenly about in droves.  It was only a few weeks ago that we were covered in snow.  How can we possibly need the fly masks already?!

It is very easy, as I have discovered, to come home from work and sit down for a cup of tea and a chat.  Then to look out of the window and think, ‘It’s getting a bit dark to ride really – I’ll have to ride tomorrow.’  Especially when the ground looks like this.

However, this evening I deliberately did not sit down at all when I got home.  Instead I gulped down my tea, got changed and went straight out to the ponies.  Cookster was sporting some additional decorations! 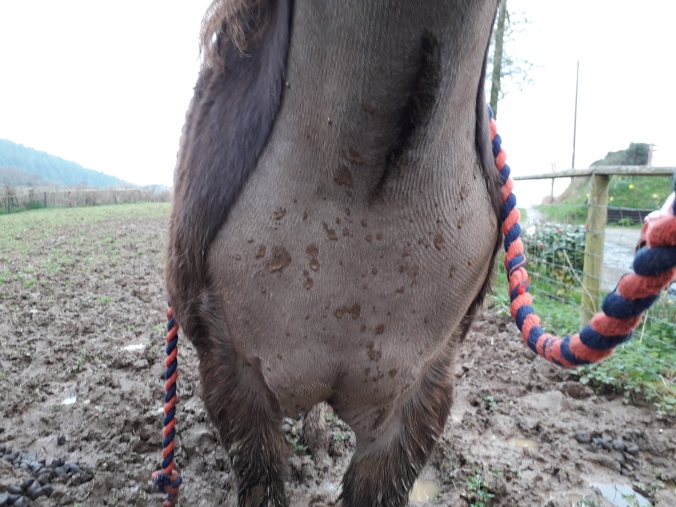 It was a lovely evening and Galahad and I very much enjoyed our hack.  He seemed to relish the chance to have a canter on the verge too – they probably aren’t running too much in these wet fields!

Really it should be April downpours!

We have a couple of days of sunshine without rain and the ground starts to look like it might be thinking about drying up.

Then the heavens open and we are swimming in mud again.  It seems to be never ending!  The other day we rode out in reasonably nice weather but it wasn’t long before we were being drenched in some very cold rain which turned to hail after a few minutes.  All of the lambs in the surrounding fields suddenly started complaining  and before we knew it they had disappeared into the hedges.  It didn’t make them quiet though – we were surrounded by a wall of sound.

On the bright side, the rain means that I have good reason to wear my riding skirt.  It keeps both of us lovely and dry – although when I am wearing it I’m sure the rain is more likely to hold off!

Another positive is that since the clocks went forward we have been having some lovely light evenings and there is finally time to ride after work.  It is wonderful to get more riding!

Yesterday was simply beautiful and the ponies took full advantage of the sunshine by simply walking through a gate that was accidentally left open and gorging on the lush grass.  It wouldn’t really have been a problem except that it is quite a steep slope and the ground is still very slippery.  Luckily they were far too interested in the grass to run about!

We thought we would have terrible trouble catching them and dragging them away for a ride but actually Cookster  just stood stock still.

Galahad was another story and would not let me near him.

He was quite happy to follow Cookster up to the stables though!  We found some very interested visitors when we got there – waiting for their breakfasts. 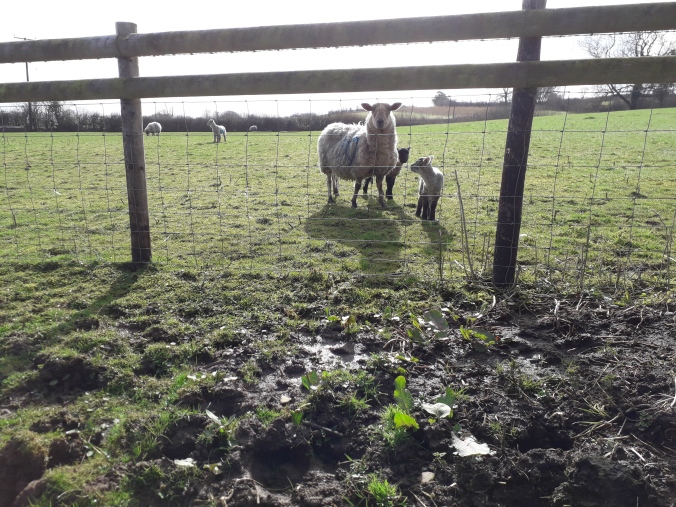 Sadly we didn’t have any for them. 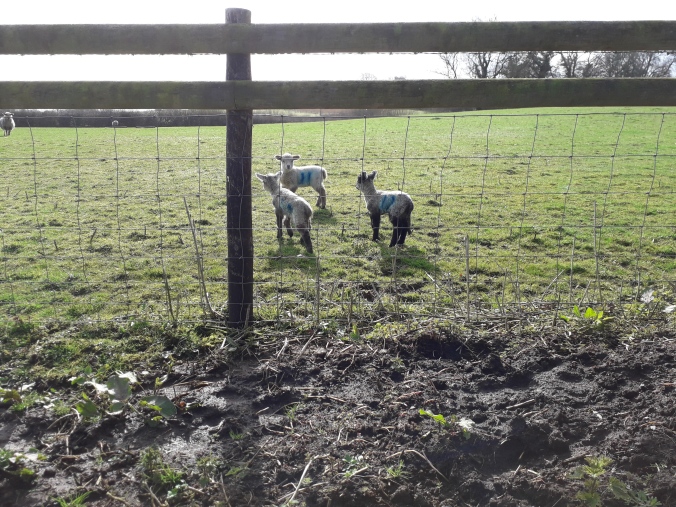 When we did get out for our ride we had a lovely time.   The primroses are suddenly flourishing  – I thought there were plenty of them before but overnight they seem to have multiplied and now there are whole banks covered in them.  They were beautiful!

Before we went out to dressage last week I had to mend Galahad’s fleece rug.  He has been wearing it under his field rug for the past month and one of the shoulder seams had completely burst.  He had torn around one of the front buckles too and I couldn’t really take him to a show looking like that!

My evenings running up to the weekend were spent in front of the sewing machine.

I am not a natural at sewing  and the fleece had stretched a bit so the seam was not perfect but I don’t think it turned out too badly.  I especially like the natty striped patch inside the buckle! 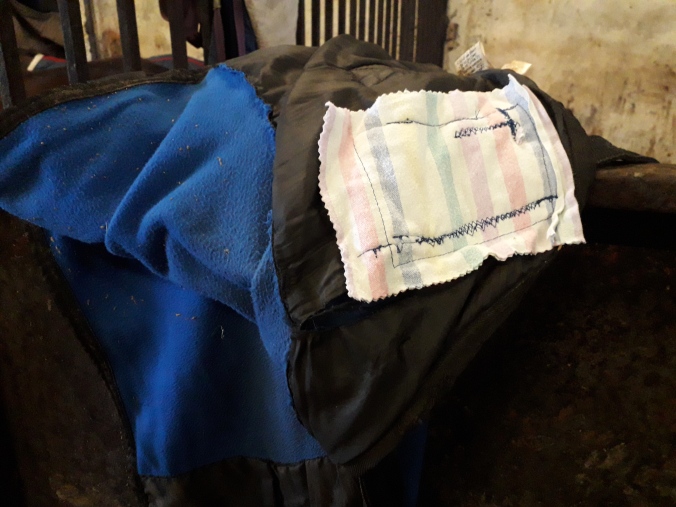 It certainly does the job and I think Galahad looked pretty smart on Sunday! 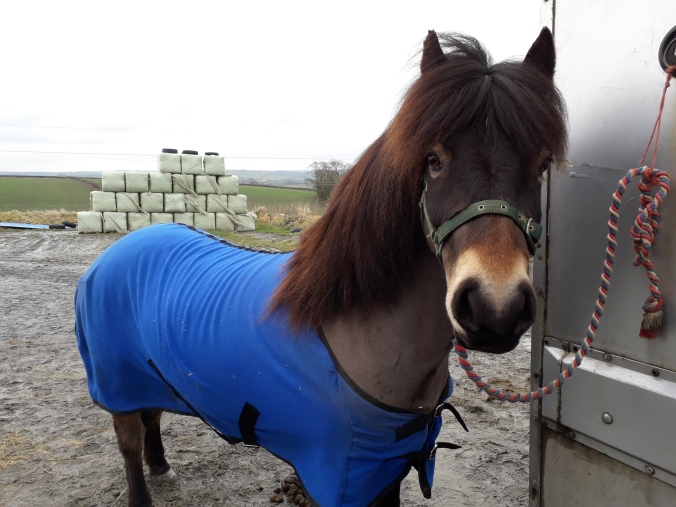