Wednesday was the day of the Exford Show.  We go every year as it is such a lovely little event.  My favourite part may be the used tack stall which always has so much I want to buy.  I almost bought a gorgeous numnah this year but by the time I had made up my mind it was gone.

It is always fun to compare all the ponies to Galahad – especially now that he is going to shows himself.  Hopefully next year we will be able to compete here too. 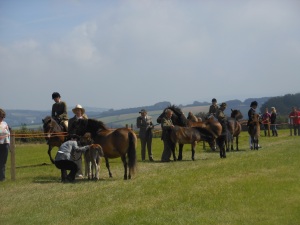 This obviously wouldn’t be our class but look at the tiny foal!

Yesterday we went for a dressage lesson which we shared with five other people so was very exciting.  Even more exciting was the foal in the paddock next to the school.  It was all a bit overwhelming – Galahad was very wound up and it took all my energy just to get him listening to me and sticking to the speed I wanted.   It has been a while since he felt so keyed up but then he hasn’t had a group lesson for a while either so it was understandable.  I was proud of myself too – not that long ago I would have really worried which would have made him so much worse.

Once he was settled he actually did some fairly nice tests.  As long as I can keep him moving he is starting to relax into a nice outline.  It is not consistent yet but it has never been my strong point either so we are learning together.

Afterwards (once we had cleaned tack and packed for the show!) we had a yard trip to a driving competition in the village.  The competition itself was actually the next day but we went to have a nose around and see what a different sport is like.  One of the competitors had a whole stable attachment on the side of their lorry which was amazing! 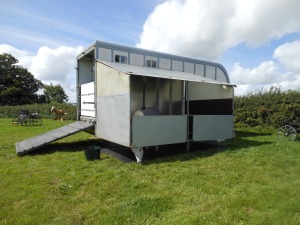 I watched the driving at the World Equestrian Games last year and it looks like so much fun.  I would love to drive our ponies but I’m not sure how well Galahad would cope with it – he hates things coming up behind him so a cart would probably be a bit too much!  Even if he could cope it might take me a while to get my head round the obstacles on the marathon course.  Those things can be complicated!