At the moment it seems that every time I ride after work this is the view I get.

It doesn’t matter where we go, I always manage to be riding directly into the sun and I can’t see a thing.  I was congratulating myself that at least the cars I met would be able to see me when a car behind approached us rather too fast.  It then dawned on me that cars going the same way as me couldn’t see either.  Not very comforting.

We didn’t have that problem today though as instead of riding we had a mammoth grooming session.  Galahad’s summer coat has always been rather slow to come through and I decided it was about time I attempted to do something about it.  I’m not sure I really had much of an effect but hopefully the pony will feel a bit better for it. 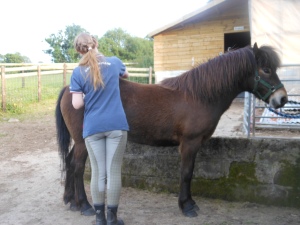 I am thinking of making a horse hair cushion!

I also did some in hand work with him.  We have been doing a lot of it recently, particularly turns on the forehand.  He needs to build up muscle in his hindquarters and his off hind is particularly weak.  He really struggled with these at first but is starting to move really nicely now.  He is even beginning to get them when ridden, at least when he is moving away from my left leg.  The other way still needs some work but there is a definite improvement. 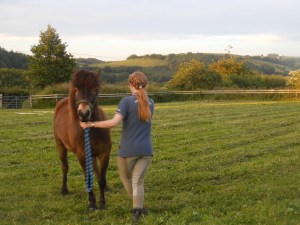 The picture doesn’t really do him justice, he is doing well with his turns on the forehand now.