Having the ponies in at night over the winter is of course more labour intensive than their summer routine. Apart from the mucking out, I have to deal with Cookster’s mild dust allergy.

Over the summer it can sometimes be difficult even to shut him in the stable – the dry weather makes everything too dusty. With a reasonable amount of rain we lose that problem but I do still have to think about haynets which need soaking for him.

We don’t have a hay steamer but have developed our own system and soak the nets in the stream. That works perfectly as it washes all the dust away so the nets aren’t sat in dusty water. The only problem is that hay floats so we have to stand on the nets to weigh them down.

As you can see this is a job for all the family!

It does make us look a bit odd though – my sister once found herself being watched by an estate agent and the people he was showing round the field next door. They didn’t buy the house and we still don’t know if it’s because they thought the neighbours were mad!

The evening is one of my favourite times of the day.  When I go out to the stables everything is usually very still and the world seems very peaceful.  Unless there is a storm of course but that is different.

Last night I went out just as it was getting dark.  It was a lovely evening with a gentle breeze and only a faint hint of rain.  The church bells were ringing and made a wonderful musical backdrop to the yard chores.

I tried to record the sound of the bells but all I could hear on the video was the absurdly loud stream.   I’m sure it was louder in the video than in real life.  Instead, here are the ponies cosily tucked up in bed (Cookster is invisible because he has his head in a bucket!).

On Tuesday the next farm to us hosted a wedding reception at their restaurant and warned us that there would be fireworks in the evening – a £600 display.

Since the ponies panicked at a similar display last year we have kept an eye on them whenever there are fireworks about.  This time we decided to stable them as it kept them almost as far from the fireworks as we could get them.

It had been pouring all evening so I was not sure they would go ahead but not long after nine there was a huge bang which made me jump and started the dog barking.

The fireworks were certainly impressive and the bangs echoed round the valley most dramatically.  They can be heard in the video but the volume may need turning up!

The ponies were actually fine with the fireworks.  They were perhaps a bit more tense than normal but certainly not panicking.  In fact, they sometimes looked as though they were enjoying they show! 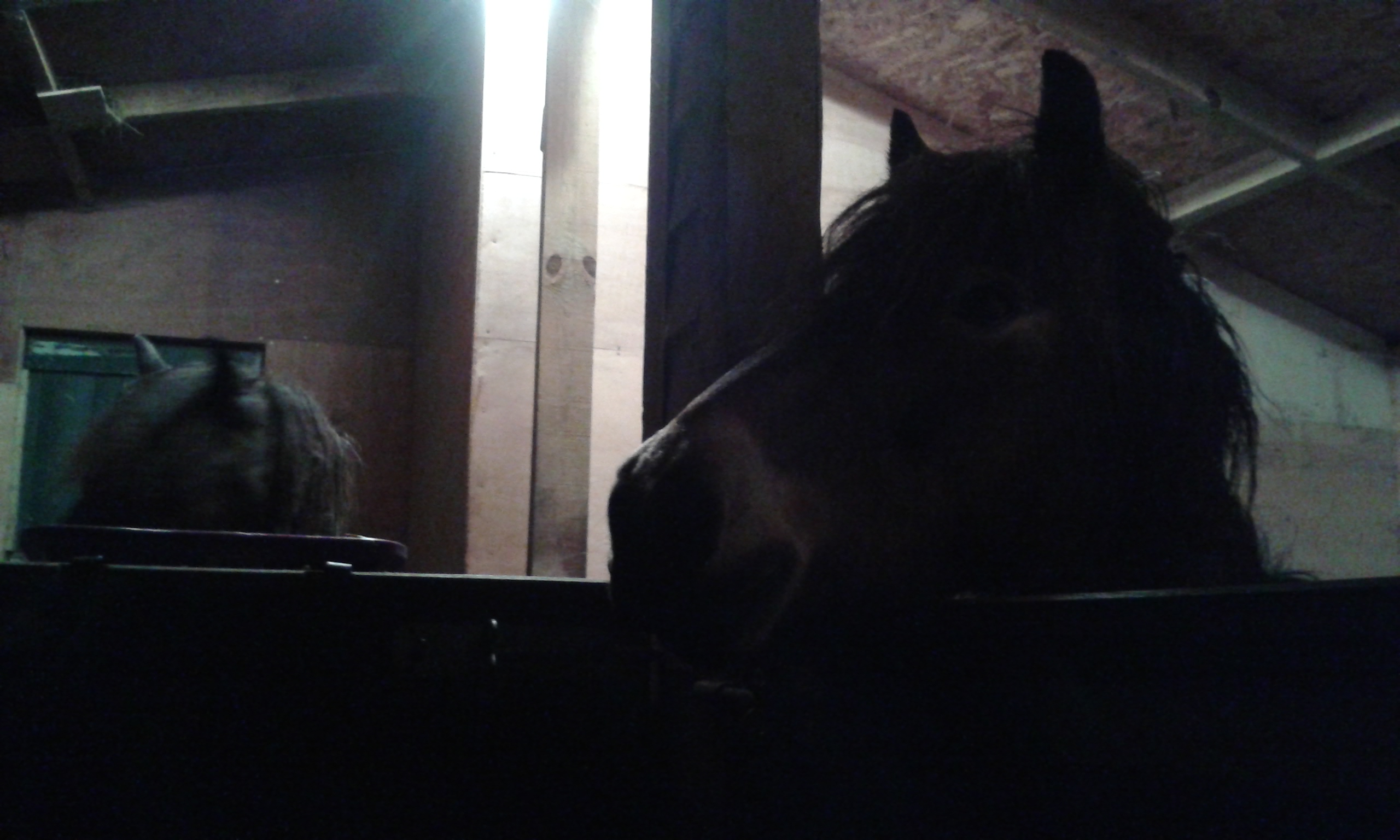 It is often the little things which give the most joy.  I went up to the yard to let the ponies out and found them both in one stable (we keep the doors open so they have the run of the yard all day) having a nap.

It isn’t that unusual but for once Galahad didn’t get up when I appeared.  He so rarely stays lying down around people that it feels incredibly special when he does.

It was a good day!

It turns out that it is not just the horses on a yard which can be dangerous.  Danger can hide in the most unexpected of places.

Yesterday morning I was opening Galahad’s stable door and probably thinking more about Cookster behind me than about what I was doing.  After all,  how hard is it to open a door?  Quite hard apparently – I opened it straight into my face and now I have a lovely lump on my forehead.  It was painful!

The ponies had a day off today which meant I was a little late going out to see them this morning.  They were pleased to see me and I felt very loved.  It doesn’t matter that it was probably all cupboard love!

The ponies might be spending a couple of weeks away but their stables are not unoccupied.

A couple of months ago a pair of wrens started trying to build on a failed swallows’ nest from last year – it kept falling down and had been abandoned.  The wrens were more persistent and kept doing their best to build.  Their efforts tended to fall down as well but that didn’t put them off and one evening we found them perched on an impossibly thin looking sliver of nest.  Sadly that fell down too after a few nights and they were obviously never going to be able to lay any eggs on it so my Dad put up some little shelves for them.  Almost overnight a proper nest had appeared and pretty soon the wrens were sitting on eggs.

Now we have chicks! 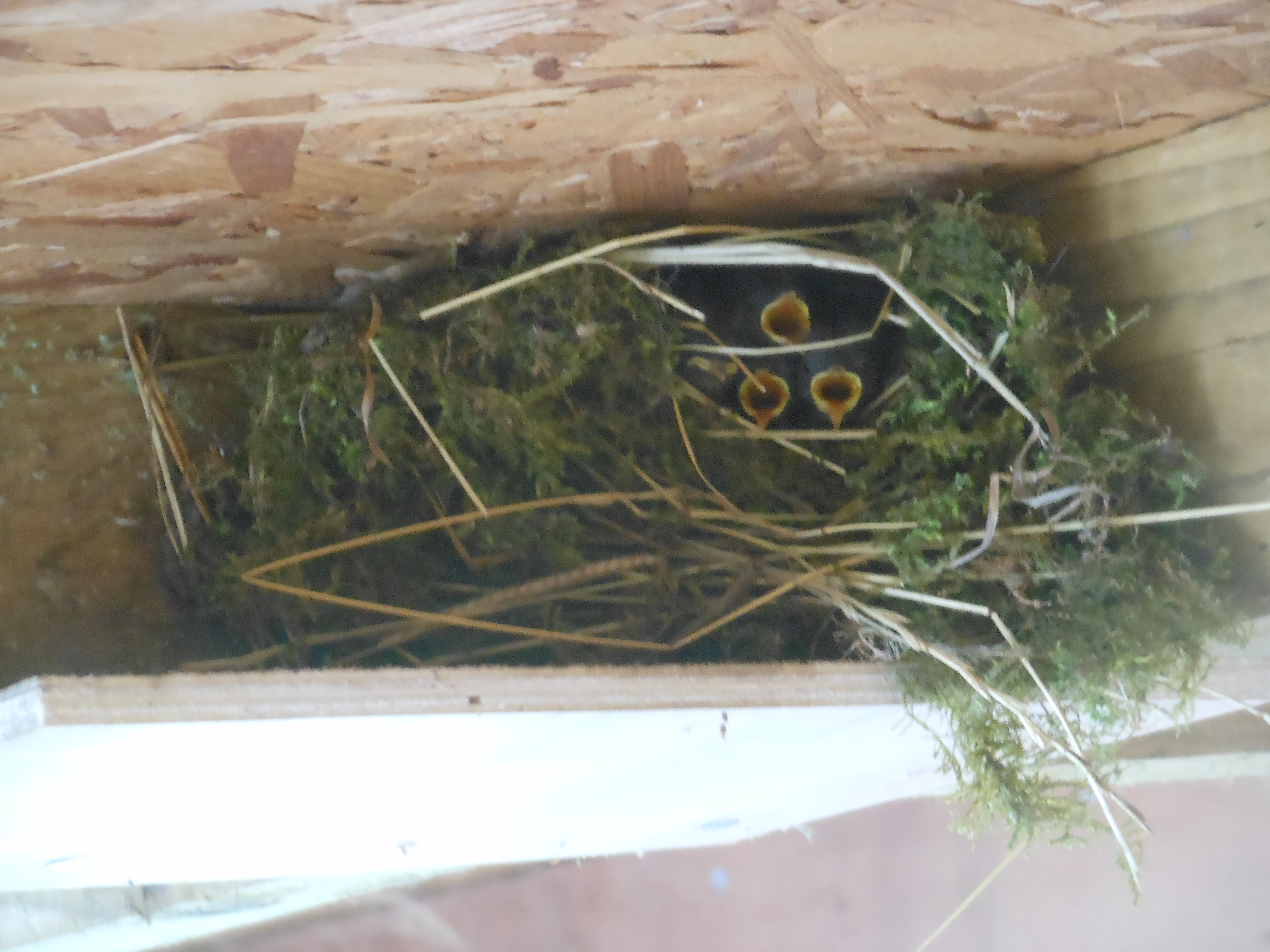 I have seen four and the parents are constantly flying in and out with food.  It is lovely to see.

The swallows have also returned and are starting to build a nest on another shelf.  They haven’t finished yet but they are definitely still around so we are hopeful that they will stay.  They make wonderful house guests!

We finally got around to buying some rubber mats for the ponies’ stables.   I have been meaning to get them for so long but I found all the choice a bit confusing really.  There are so many different options available and I was very keen to have multi directional drainage underneath but struggled to find many that offered it.  It’s not exactly something one can search for either!

I eventually found what I wanted at our local farm supply shop.  I would have found it sooner but it wasn’t on their website and I only discovered it by trawling round their yard one very cold, rainy morning.

The mats are now installed and as you can see are already blending nicely into the floor.  The ponies track a lot of mud around with them!  We should save a decent amount on our shavings bill now.  More importantly, the ponies seem quite happy with the new arrangement which is excellent news.