On New Year’s Day my sister and I planned to go for another tinsel ride, this time with half time snacks and hot chocolate.  However, the weather was absolutely vile and the idea of standing about in the driving rain wasn’t exactly appealing.  We scrapped the snacks part but still rode – we are not fair weather riders!

There was a rather large puddle at the end of our lane when we went out.  More of a flood really as there was no way round it.  By the time we came back it had visibly grown and we had great fun splashing through it.  I did anyway.  Galahad wasn’t too sure at first – he thought the main road looked more fun but was persuaded otherwise.

I am actually wearing a riding hat underneath the hood but I didn’t want rain going down my neck!

When we got back I had a go at practising the dressage tests for an upcoming riding club event.  The fields are definitely too wet to do any proper schooling but I ran through both my tests in walk just so we could get the shapes.  The first test is Intro A which we have done a couple of times before but the second is Prelim 12 which I have never actually ridden.  I am a bit concerned about remembering that one.  I run through it in my head all the time and am constantly drawing it in the air but it isn’t the same as riding.  I won’t get a chance to do that until the competition itself so I’ll have to hope for the best. 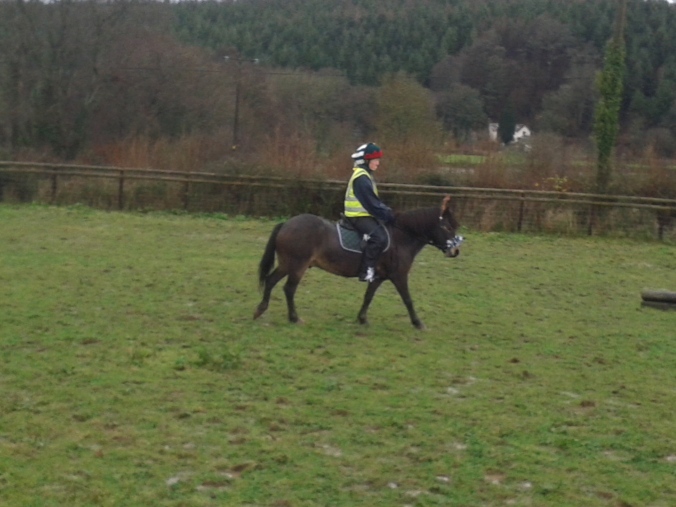 Galahad behaved fairly well.  He was a bit cross as my sister’s pony had gone back to the yard and he doesn’t really like being ridden on slippery ground anyway but in general he was listening to me.  There wasn’t much more I could ask of him.

When we got back we had our hot chocolate and mince pies indoors.  It wasn’t quite the same but much warmer and very cosy.