When I was little I remember riding out with my riding instructor’s daughter to deliver their Christmas cards.  I loved it and it was something I always wanted to do myself.  Last year was the first time I was able to ride Galahad and I of course made sure that our closest neighbours’ cards were delivered by pony post.

Naturally I wanted to do the same again this year – although I seem to have had less time free to do so.  Galahad and I set off up the hill – me with the cards clutched in my hand.  New this year was my elf jumper with rather noisy bell.  I thought Galahad would object to that but he barely seemed to notice.  He has improved so much in the past year!  Partway up I decided to adjust Galahad’s antlers.  There I was with reins, whip and cards in one hand, leaning right forwards over his ears.  Of course that was the moment a pheasant chose to fly up in front of us.  Luckily Galahad started at it but didn’t really shy properly.  Which was lucky as I wouldn’t have stood much of a chance of stopping him.

As I was on my own this year I had to leave Galahad tied up to post one of the cards – last year my sister held him.  I am fairly sure that it was the first time he has been left tied like that on a ride.  I remember taking his headcollar and leadrope with us before but don’t think I actually used it that time.  He stood quite patiently though and watched the world go by.  This was when the actual postman went past which I found a bit embarrassing – as if I was doing him out of a job! 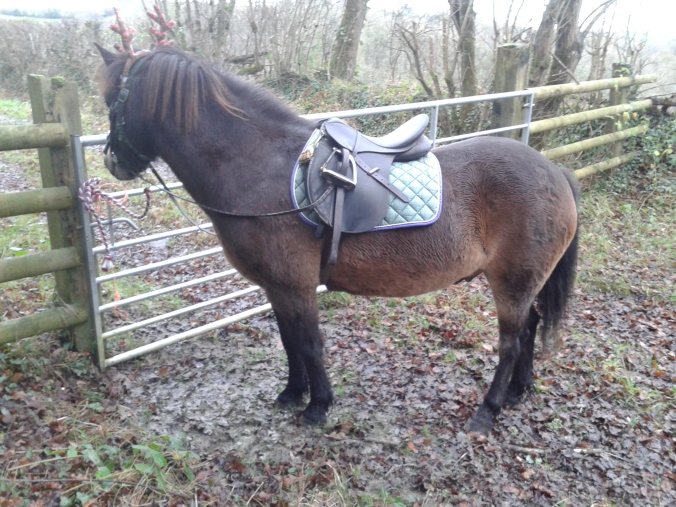 We were just finishing our deliveries when it started raining.  Not bad timing!  Except that we carried on riding for about twenty minutes afterwards.  Still – at least the cards were dry.