The thunderstorm we have been expecting for weeks finally broke this morning. It came with a proper downpour and hail. The ponies of course decided that it was the ideal time to come out of the stable and stand outside.

As soon as it stopped raining the blue skies were back and we rushed out to ride. I rode through our dressage test which went quite well except for him trying to get back to the yard.

I know my head is chopped off but how cool does his mane look!

We also had a little jump. He did get a bit excited then as my sister’s pony had gone back to the yard and Galahad was very keen to go too. Once he settled he jumped very nicely. 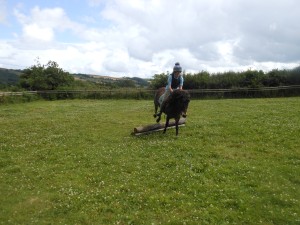 He jumped the actual tyres for the first time and that was probably the skinniest jump he has ever tried as well. 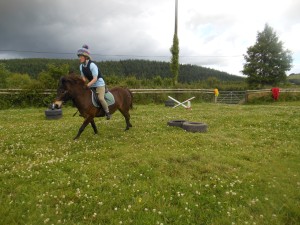 No jumping in this one but do you see how the sky is beginning to get a bit ominous?

Then there was a huge clap of thunder and pretty soon this was happening.

We called it a day then which turned out to be a very good plan – the heavens opened and in the two minutes it took to get to the stable we got absolutely drenched. It was hailing too! My sister came running across the field after us with coat and tabards flapping which nearly caused Galahad to panic. I had to scream at her to stop because the hail was so loud. We survived though and by the time we had finished and were back inside the sun was shining again.

One thought on “Dodging the Thunderstorms”