Galahad is a nine year old Exmoor gelding.  He was born on the moor and taken off at six months in the annual round up.  He came to me at eighteen months and we have grown up together. 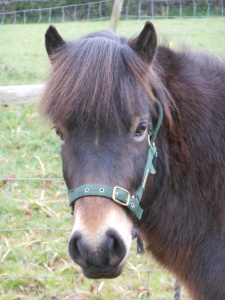 When he first arrived he was petrified of everything.  A sneeze would send him across the field and once he jumped the paddock fence because he took exception to my grandfather’s hat.  It took a lot of work to gain his trust and it was very easy to get too confident, push him a bit too much and make him panic – undoing all our hard work.

We devised many obstacle courses to get Galahad used to lots of scary things.

When it came to backing him it felt like we were starting all over again.  He would panic and completely explode.  I had some crashing falls and once terrified my sister when I was so winded I couldn’t breathe, let alone talk.  She kept asking if I was okay and all I could do was groan.  I knew I was fine but wasn’t capable of saying so!

It took a lot of time, a lot of help and numerous back checks but last summer I was finally able to start riding him properly.  It turned out that when he was branded as a foal the brand may have damaged the muscle underneath.  He is not in pain now but he will always walk a bit oddly.

We worked through it though and once he was rideable started getting him used to all sorts of things – he can still be scared!  The first time I was given a drink whilst sat on him I had to throw it across the school before he exploded.  Luckily it was a plastic beaker.  Sitting still was important to start with too – not waving my hands about when talking was very hard but necessary if I didn’t want him to run off.

It has been a lot of work but we have come so far in the last year.  Galahad now (mostly) trusts that I won’t do anything or make him do anything that will hurt.  I (mostly) trust that he won’t do anything silly that will throw me off.  We are improving all the time.  Just a few months ago I didn’t feel safe enough to open a gate whilst mounted – he couldn’t cope with me leaning over that much.  Recently I opened a gate for which I needed to have my weight so far forward that if he had moved at all I would have been on the floor.

Playing gymkhana games was an excellent way to prepare for gate opening!

The last few months have been fantastic.  I have been living my childhood dream and I can’t wait to share the rest of our adventures.