The eagle eyed amongst you may have spotted that recently I have been riding Galahad without a noseband. I actually quite like the look on him but I didn’t decide to do it to make him pretty!

I realised that Galahad had developed a small bald patch on his face and, although I am almost certain that it wasn’t caused by his noseband (which is so loose that it basically does nothing), I took it off to remove any chance of it making the rubbing worse.

It is in fact probably caused by his fly mask which I have now also taken off. It is very odd – this year both ponies have grown some white hairs where their fly masks sit, even though they have never had a problem before. Thankfully neither of them are showing any signs of sore spots so hopefully they haven’t actually been hurt by the masks.

The fly season is now drawing towards its close so I can leave the fly masks off without causing a problem. We will need to think of a new solution for next summer though!

It seems that the fly season is upon us already.  We have had to fish the deosect out of the tack room and have sprayed the ponies.  Galahad hates fly spray so he didn’t enjoy it at all but at least deosect doesn’t need to be applied so often.

The fly masks are back out as well.  It seems very peculiar to have Galahad’s rug on at the same time but it’s still pretty cold here at night and not warm enough to leave it off yet.  He is enjoying the time without it during the day though.

Of course, all of this means that hunting for lost fly masks in odd corners of the field is once again a regular part of my life.  That’s how I’ll be spending the next few months!

Every summer we are bothered by the flies but this year they seem to be even worse than usual. 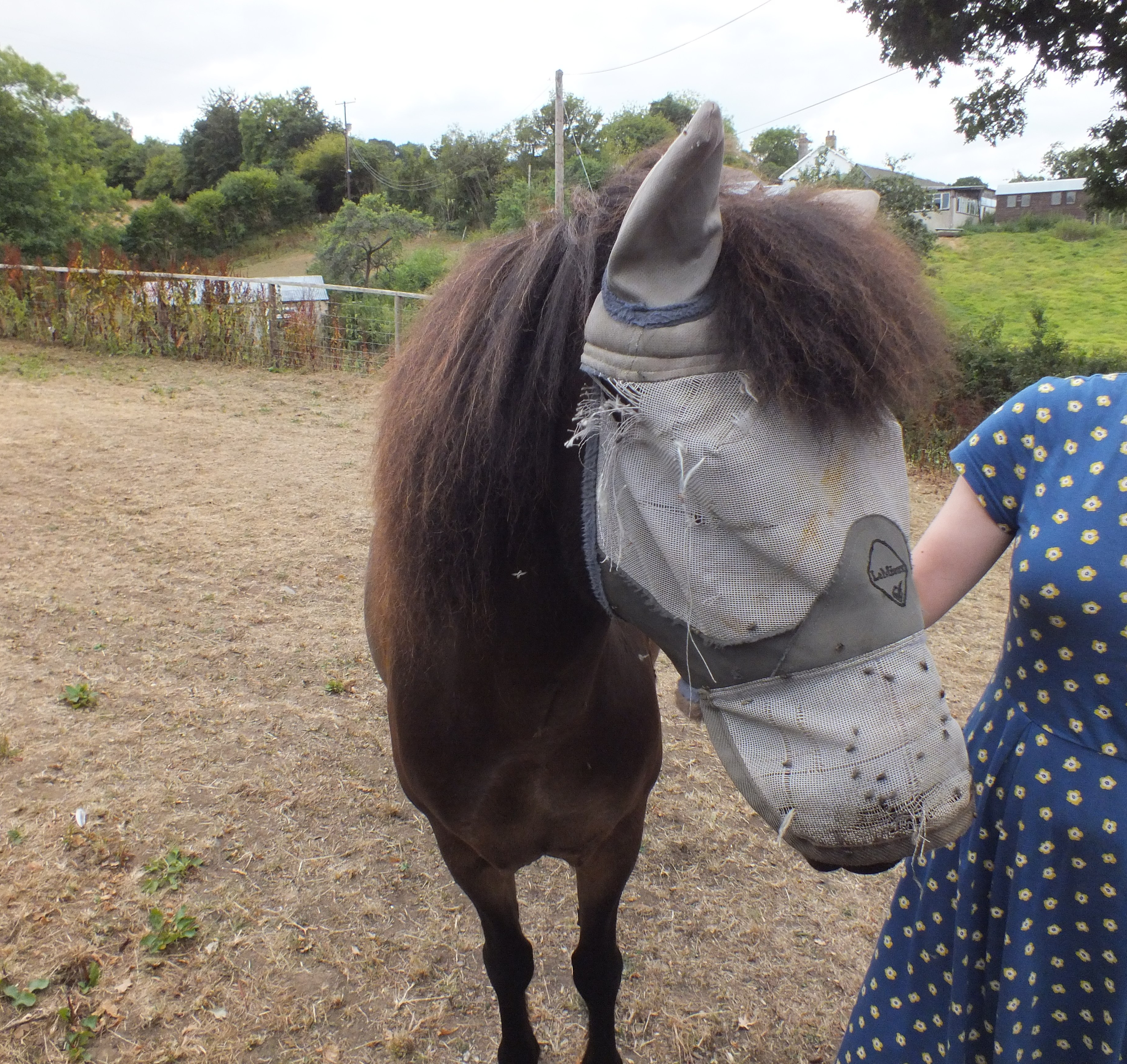 Galahad had pretty much destroyed his mask now. The ears, however, are still intact so I am very happy indeed. It has also lasted much longer than his old mask so it was definitely a good investment.

As ever, we are using deosect – Galahad hates being sprayed and anything that can reduce the amount of flyspray we have to use is a bonus.  NAF’s citronella gel is also great for this.

This year we have also gained some of their citronella wash which we use when we wash the ponies down after exercise.  It is certainly much easier than trying to spray Galahad – although he has improved greatly and sometimes barely moves whilst he is sprayed.  Other times, of course, he kicks up a huge fuss!

I have also taken to soaking the fly masks in the citronella water.  As you can see, they can get covered in flies and although the ponies are protected from them it can’t be at all pleasent.  It certainly doesn’t look nice.

I have mentioned before the trouble we have with fly masks.   Firstly, the ponies are constantly losing them.  Secondly, they tear many holes in the ears.  Since the main reason they wear them is because they get terrible bites inside their ears, the holes make the masks practically useless.

This week I decided to do something about it so I marched into our local tack shop and demanded a mask with heavy duty ears.  I came away with a LeMieux one which has two layers of nice thick fabric on the ears and which will hopefully do the trick. 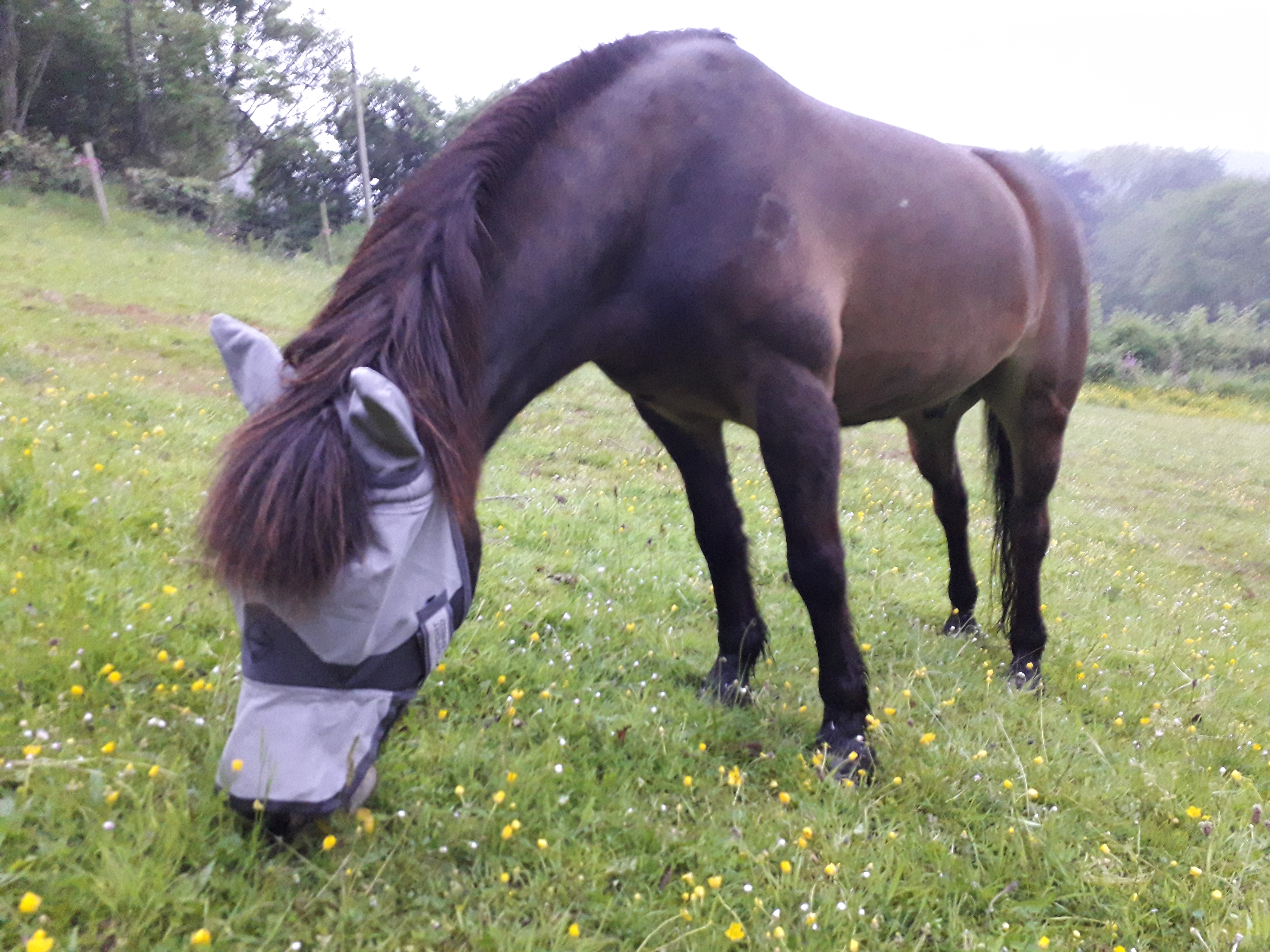 Galahad has been wearing it now for three days and has managed to lose it three times. 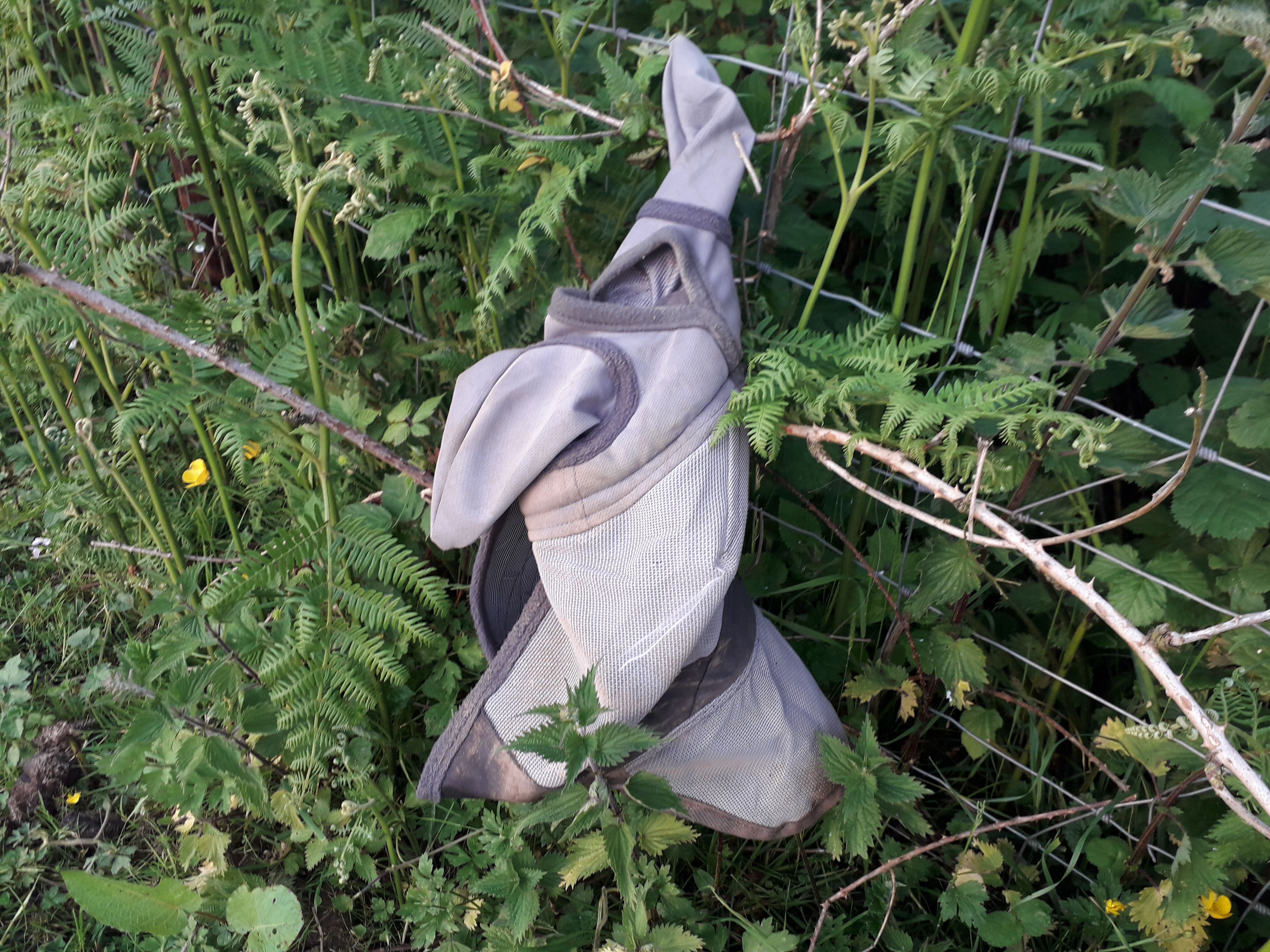 However, so far the ears have no holes at all so I am very hopeful.

I have never owned anything from LeMieux before – I feel like a proper equestrian!

The ponies are constantly escaping from their fly masks.  At the moment it is just a fact of life that when I go out to see them the chances of them both wearing hats are fairly slim. 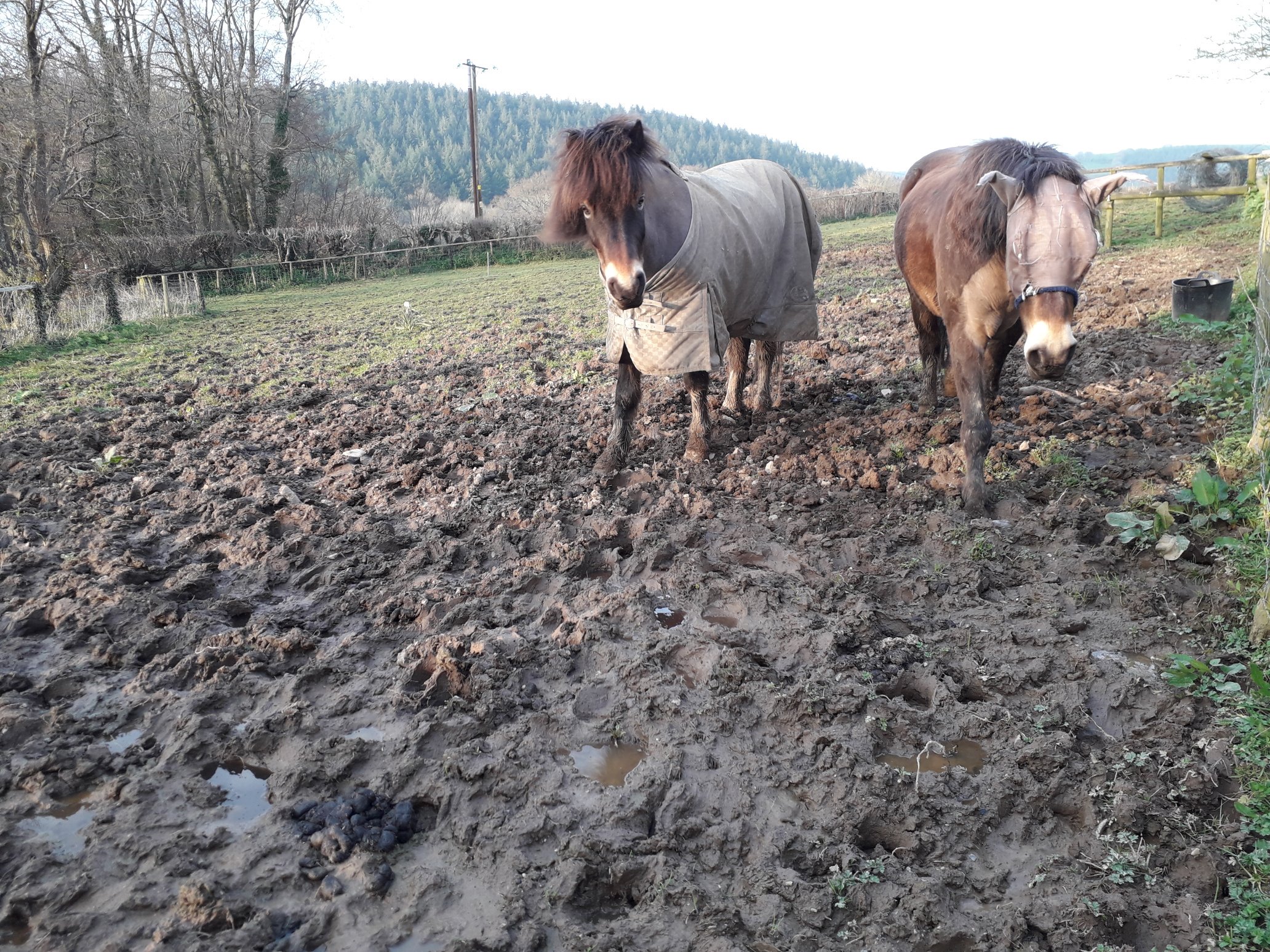 When we first put them on this year they actually managed not to remove them for a couple of weeks and I was very hopeful I would have a summer without having to walk round the fields hat hunting.

Obviously that is not going to happen but I have found I can make use of the ponies – or at least Cookster – to find them.

As you can see, Cookster is great at this game.  Me – less so!

I haven’t tried it with Galahad yet – mainly because I haven’t had the chance.  I’m sure it is something which will scare him at first but it’s probably quite a good exercise to try and it might even help us with our trec obstacles.  Plus, it’s fun!

The time of year has come when the flies are getting to be a bother. 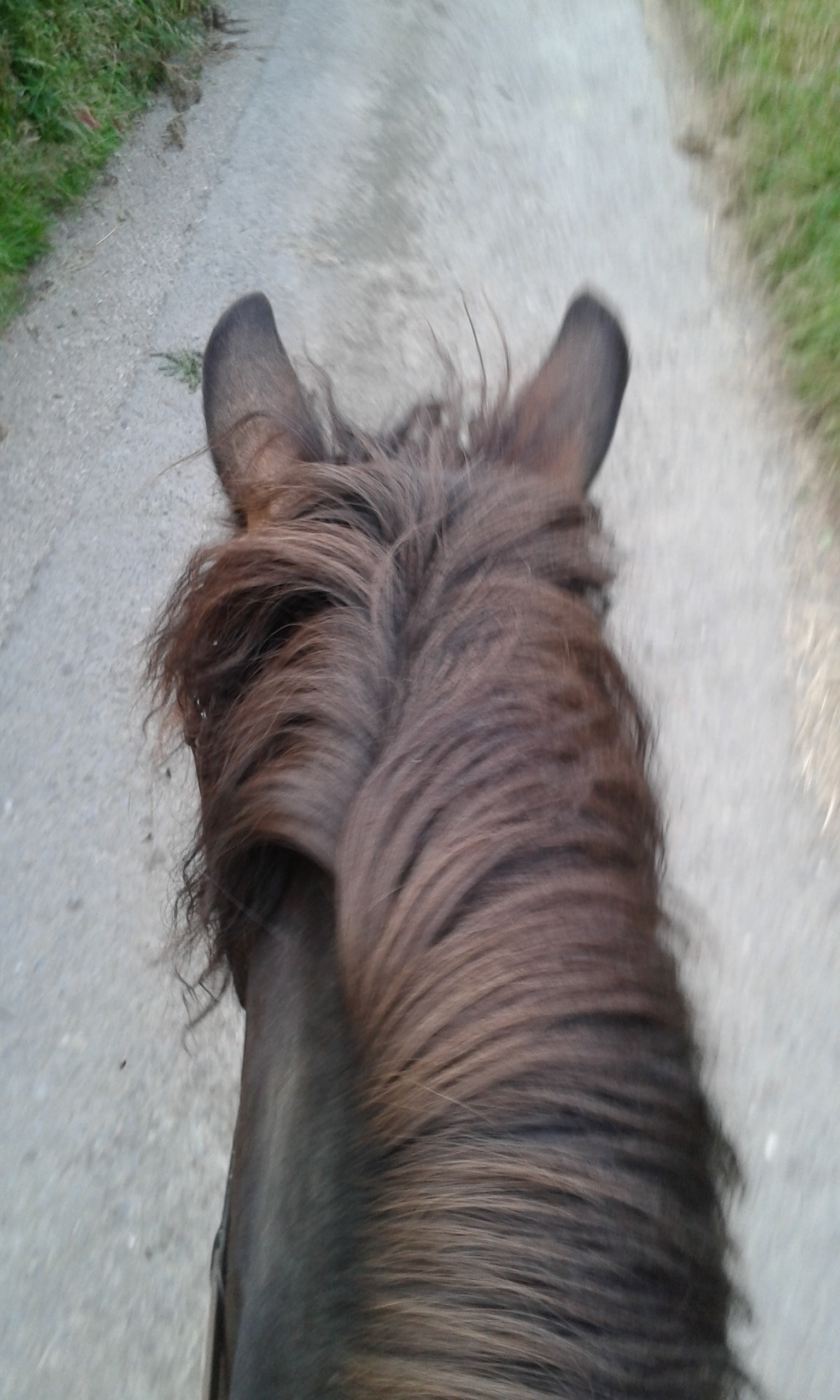 It turns out that it is very difficult to photograph the flies bothering your pony.  If you look carefully you can just about see them!

The deosect worked very well for us last year and is being useful again this year.  The ponies have also been wearing their fly masks for a good couple of months, although Galahad’s could definitely do with a few repairs!  He has been very good at keeping it on recently but normally he is a proper Houdini and I am constantly having to hunt the field for it.

We have a new fly zapper in the stables.  The old one was really only designed for indoor use and the stables are not indoor enough.  The ponies are not at all keen on the noise it makes when a fly is killed and run out of the stable every time.  We are working on desensitising them and they are definitely improving.  I am loathe to turn it off as it has had a visible effect on the number of flies around the yard.  The ponies don’t seem to be suffering so I am hoping that it will work out well in the end. 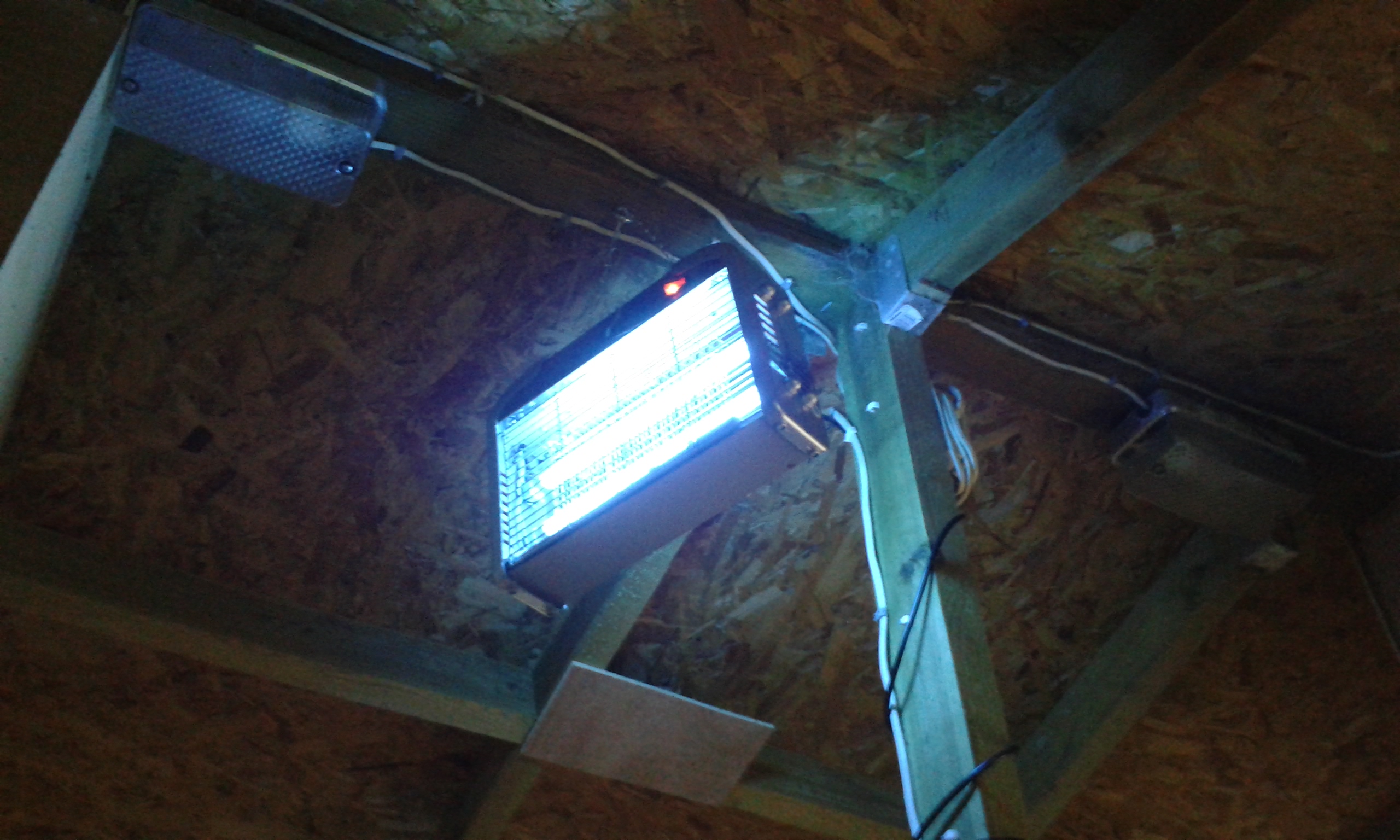 Galahad’s fly mask has pretty much had it now.  It has gradually been getting more holes but now one of them is big enough for his ear to stick through.

Given that I only got it because he has trouble with flies in his ears it seems a bit redundant now. It has also worn a (very small) bald patch on his ear which is obviously not good at all.  I would mend it but hopefully  (touch wood) the flies seem almost gone for now.  I’ll mend it if his ears get bad again, otherwise I’ll just get him a new one next year.

Strangely the more damaged it got the less often he managed to escape it.  Perhaps the holes gave it extra ventilation so he didn’t want it off so much.  I am now more likely to find my sister’s pony hatless.  His mask has lasted twice as long so far and the only problem with it now is that the velcro itself is wearing out.  He doesn’t have the same desire to get rid of it though.  I have found him in the field with the velcro completely undone but the mask still on his head!

I just gave both ponies what I hope was their last dose of deosect for the season.  Galahad is not at all keen on being sprayed and most years up to now I have been spraying him every day with normal fly spray.   For several years I had to use a sponge to get it on.  Deosect shouldn’t be used nearly so often so he must prefer it.  It has also so far prevented him getting the nasty persistent bite he usually gets every summer so I am happy too.  It is pretty good stuff!

On Saturday my sister and I went for an early morning ride.  The valley was still full of mist but as we climbed the hill it got thinner and thinner and it was obvious that we would be in sunshine before long.  There were loads of cobwebs looking absolutely beautiful. 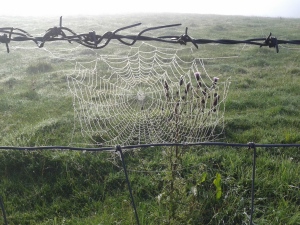 This is me breaking all the rules to take my photograph!

Once we were above the mist the sun was actually rather hot and the view over the valley was spectacular.

We had a lovely gallop over the fields.  Galahad was rather keen and inclined to cut corners so there was a fair bit of circling on my part.  He wasn’t actually out of control, just enjoying himself very much!

By the time we made our way back down the mist was more or less gone but there was just enough left for these magical rays.

Galahad has added a new trick to his repertoire.  Apparently fly masks are worn over one ear this year.

You wouldn’t think it was only a couple of months old would you?  He does like to destroy it!

On Wednesday we jumped for the first time in ages.  We started very small as Galahad can get rather over excited and we hadn’t played with the tyres before.

He stayed nice and calm though and considering our lack of practise he did very well. 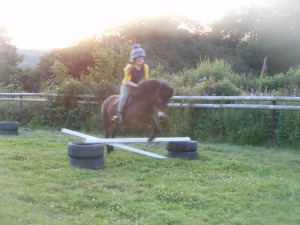 The only issue we had was when I stupidly said I would try one more jump and he ran out.  A few times.  We had to lower the fence and start again.  I think (hope) he was just reacting to my sister being straight ahead over the jump.  I do need to get him more used to people being around – I am hoping to take him to his first proper show next month.

We had a nice gentle hack this evening which was lovely except for the FLIES which were awful.  We picked them up at the top of the hill and they followed us all the way back down.  Galahad can react badly to fly bites – not in a sweet itch way but he normally has one bite a year which stays raw for a couple of weeks.  I think it causes me more distress than him though!  So far this year Deosect has kept the flies at bay but if anyone has any tips I would welcome them!

This is our current solution. I’m not sure that it made any difference but it made me feel better.

Galahad also spends the summer in a fly mask as the flies in his ears can be terrible.  He is sometimes a real Houdini with it though.  He goes for days with no trouble and then it disappears, usually turning up neatly hung on a tree.  Last time it took me two days to find it and then it was here.

Something tells me he didn’t want it found!