We have had rather an exciting time recently.  I was riding down the hill towards home when three girls walked across the bottom of the lane and stopped to have a good look at us.  They walked on before long but they kept bouncing to see us over the hedge.  Galahad was very intrigued and really sped up to try and see what was going on.  He does like to walk much faster towards potentially scary things which can be unnerving.

We were just getting to the bottom and I could hear a large group of cyclists approaching along the main road so I pulled up to let them pass before we emerged from the lane – sometimes that seems like the most sensible option.  The road is very popular with cyclists, although I wouldn’t like to ride the ponies along it.  It is very twisty and cars can drive incredibly fast along it.  I would feel very unsafe on a pony.

Unfortunately Galahad got spooked by a walker and shot out towards the cyclists – I thought he was going to head straight into their path.  One of the cyclists shouted, ‘Tally ho!’ which I’m sure was very amusing but was not entirely helpful.  Luckily it didn’t affect Galahad who pulled up without any trouble.  All the same, I was rather angry and a bit shaky too. 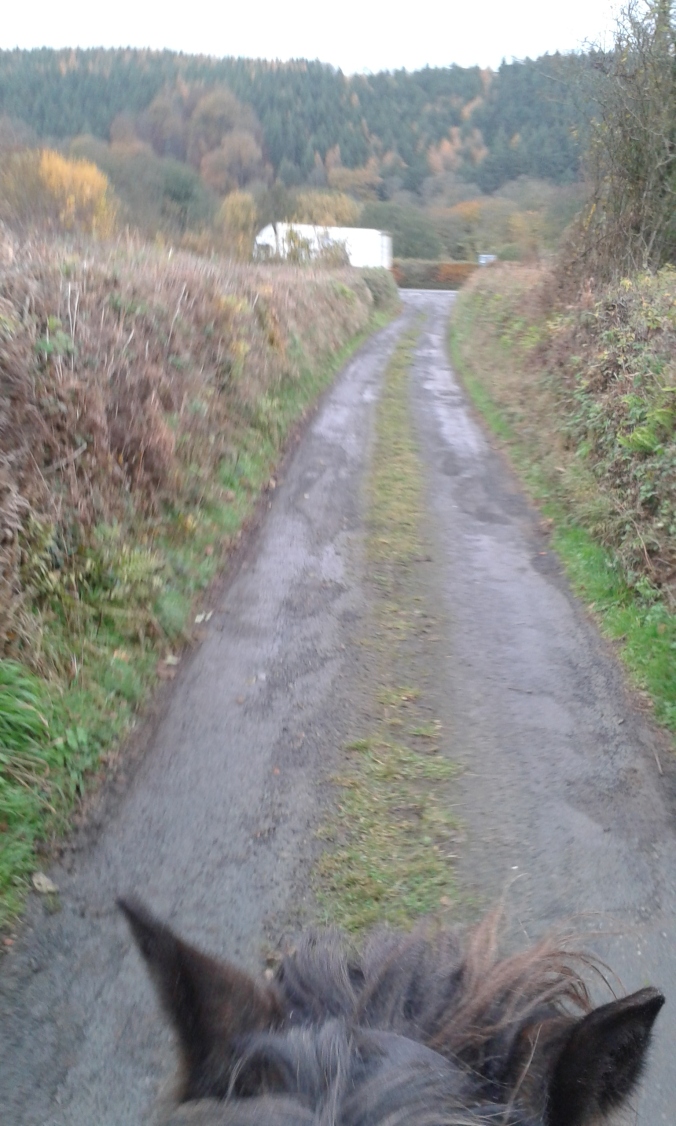 The next day I was riding Cookster down the same hill and thought I would take a picture to illustrate the scene.  I wanted to wait until something passed the end of the lane though which meant a bit of waiting about – something at which Cookster has never excelled.  He started moving just as I took the picture (hence the blurriness !) and as I was messing about with my phone I automatically pulled on the reins.  That doesn’t really work too well with Cookster – he responds much better to the legs than the reins.  He strode down the hill and before I could stop him he was cantering along our lane for home.  Apparently the cat was watching us through the window and the sound of hoof beats made her run away!

I took Cookster back up the hill a little way and then walked all the way home.  I had to force myself to keep the reins slack and just use my legs to slow him down if he sped up.  It was very hard work but we managed it and I think we learnt our lesson.  I did at any rate.