On Sunday we returned to the scene of Galahad’s showing debut.  This time the weather was much kinder to us, although it could hardly have been worse!  We did have the odd spot of rain but it was mostly dry all day and even sunny a lot of the time.

Galahad and I again did the into dressage test which went reasonably well.  Our right bend was a bit iffy to start with and Galahad tripped over something invisible but I was overall very pleased with him.  I didn’t have my tame photographer with me this year so I have no pictures but I did have an audience – I met a couple of people in the warm up who are hoping to start some dressage with their own Exmoor and they walked over to watch me.

We didn’t do any actual showing this year but two jumping classes instead.  The first was the 2’3″ novice pony which we flew round (we had a few wobbles in the lines between fences but jumped all the jumps well) and got into the jump off.  Unfortunately our steering went a bit for that so we came at rather too acute an angle into a fence and knocked it down.  There were seven of us in the jump off and two with four faults but sadly I was just a bit slower and missed out on a place. 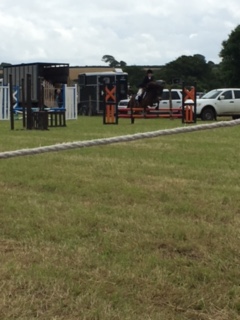 The next class was the 2’3″ open.  Although it was listed as the same height the first class had been quite a bit below height and so the fences went up and fillers were added.  I knew I had to ride positively and I was very focused on getting Galahad over the wall at fence two.  He sailed over and I was so pleased with him that I relaxed a bit too much and we had a runout at the next fence.  It was such a shame as he popped over with no trouble at our second attempt.  The rest of the course went very well apart from one rail down so I was thrilled with him. 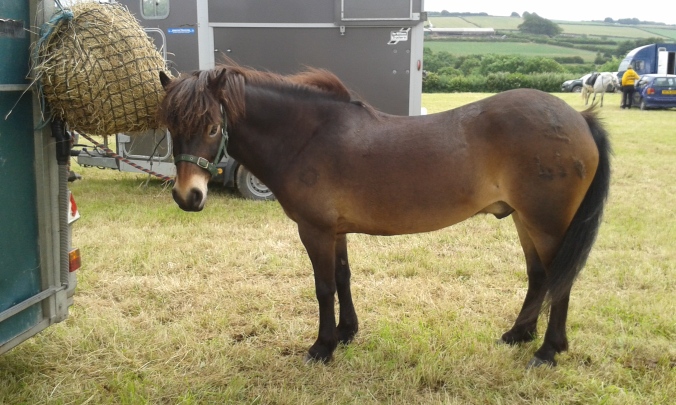 That was the end of the day for Galahad and he spent the rest of the afternoon snoozing and munching on his haynet.  I on the other hand was kept very busy – my instructor had brought several children for their first show and I was needed first as support in the mini jumping and second as a leader for the gymkhana races.  It was exhausting!  I did get some very good cake out of it though so I was well rewarded.

As I lovely finish to the day I went to collect my dressage score sheet and found I had come fourth with a score of 59.34%.  We had some nice comments, expecially about our walk.  Now we just need to work on the trot!