When I got on my half clipped pony for our lesson on Friday I was ready for anything.  He had never been clipped before and my sister has vivid memories of a freshly clipped pony throwing her off. In the event I needn’t have worried.  Galahad had a bit more energy  (a good thing) but that was all.  I could feel myself tensing ready for an explosion though which is definitely something I need to try to avoid.  The lesson went really well.  Galahad is perhaps a little stiffer than he was in the summer but that is only to be expected – we haven’t been able to school in months.  He is also still using his right shoulder as an escape route so I haven’t improved much there.  Hopefully as the ground dries out I will get the hang of stopping him.

We also jumped for the first time since before Christmas and I was thrilled with the way he went.  He had a good look at the water tray before he jumped it but he didn’t stop.  In fact,the only stop we had was at the scary fillers in the second part of the double.  Galahad was not at all keen on those but once we got over them once we had no trouble at all.

It was a really good session and clearly demonstrated that the clip was worthwhile.  Galahad had been working hard for an hour and wasn’t sweating at all.

The next day I again took advantage of the limited time we had access to the school. Galahad was fully clipped by then but still behaving impeccably.  No jumping this time but still a good session and I think we were showing some improvement, even if it was erratic.  My sister was schooling her pony at the same time so we would switch between working in a fairly nice outline to working very hard at escaping through the shoulder towards them.  In general though it was very encouraging work. 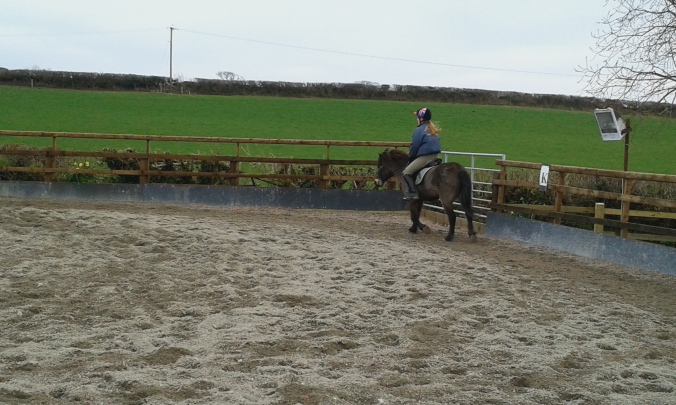 2 thoughts on “Back to School”