Our hacking at the weekend was pretty exciting – relatively speaking.  First Cookster and I met our neighbour and then immediately afterwards a Waitrose van.  At first I was hugely impressed with the amount it slowed down for us – especially as we weren’t actually on the road at the time.  Then I realised it was trying to turn into the same lane as us and so it had to slow down because we were just in the way.  Oops.

Next we encountered a lady in her back garden chasing away the pheasants.  As she lives on the edge of a pheasant shoot I think she is fighting a losing battle!  Cookster was remarkably calm about that though and barely batted an eyelid.  We then of course met the Waitrose van coming back but this time I made sure we were well out of the way. 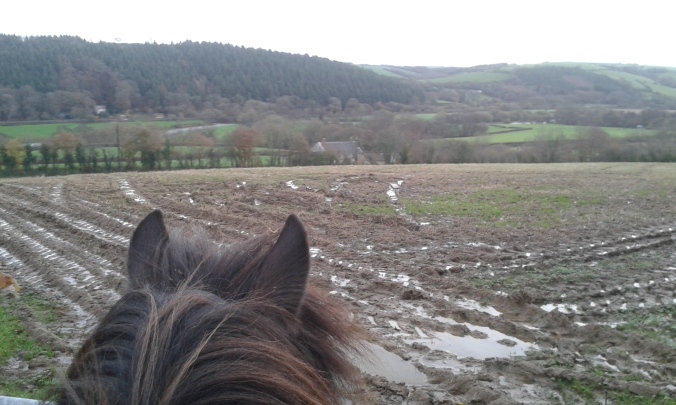 Galahad and I had a very calm ride really and only met one car.  They were extremely good at slowing down to pass us – so much so that Galahad started to grow restless waiting on the verge.  I had pulled him up from what he thought was going to be a canter and he was not overly happy about it.  It was lovely to see that the driver was so aware of slowing down to pass us though.

As you can see, it was rather a wet day but we had a great time!