As I mentioned a few weeks ago, Cookster has had to start wearing a rug to stop him freezing himself in the rain.  Obviously, we have had rather a lot of rain over the last week so the rug is very much needed at the moment.

However, although he measures for the same rug size as Galahad, the old rug he was using had rubbed his chest a bit.  Nothing too bad – his skin wasn’t raw, he just had a bit less hair than before – but he clearly needed something a bit better.

My sister therefore went shopping and decided on a much more exciting rug than Galahad has ever had.

Sadly, it didn’t stay looking like this for long – most days he is just a muddy shade of brown.  Occasionally though, the rain manages to wash off some of the mud and the stags shine through once more.

After Galahad tore his rug last week, Cookster has been causing problems of his own.  I had left Galahad’s old rug and a stable rug hung on the wall between the two stables and Cookster pulled them off and trampled them into his dirty bed.

I picked them back up – several times – but he kept pulling them down again.  I should have known better – he is constantly taking stuff down.  I have to keep a very close eye on him if I want to put my saddle on the wall or door as he can be quick to knock that down too. 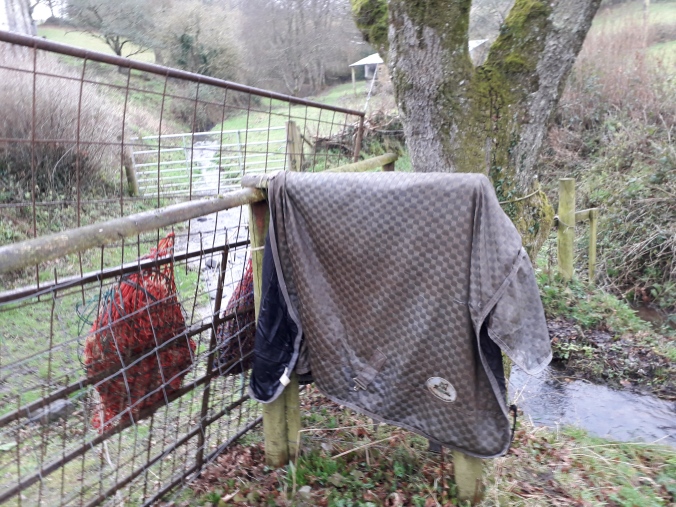 The rugs were too disgusting to put in the machine so I had to wash them by hand.  It was actually a lot of fun, although I got very wet and it was freezing cold.  It should be more of a summer job really!

Just before Christmas I decided it really was time for Galahad to have a new rug.  His old one was reasonably sound but, even though it didn’t actually let the rain through, the water wasn’t really repelled either.  The outer layer of the rug stayed wet so effectively Galahad was constantly wearing a cold blanket.  That’s not really ideal so a new one was procured. 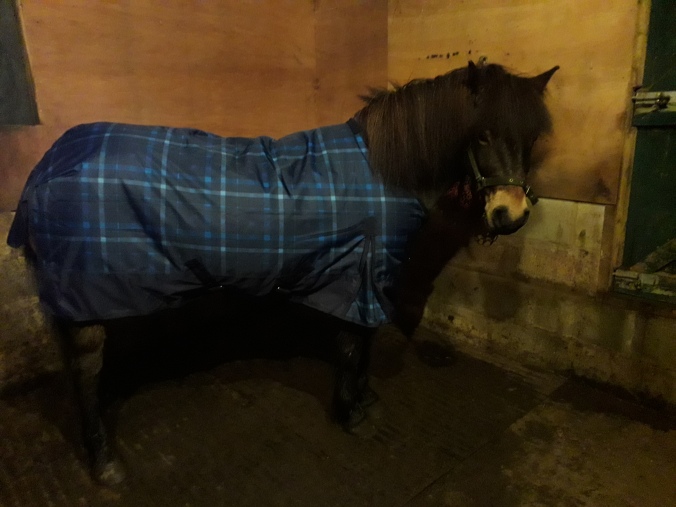 I was rather pleased with it and for a few days Galahad really looked very smart.  Then, of course, he had to roll in the muddiest part of the field. 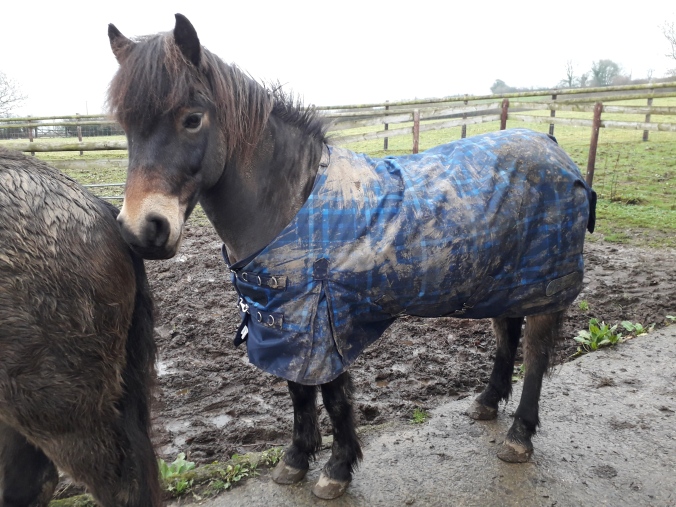 Still, it could have been worse – this week he has decided to tear it.

He probably caught it on the fence, although Cookster does like to play with fabrics so I’m not yet convinced of his innocence!  Either way – it looks like it’s time for me to get out the sewing kit.

On Monday my sister and I took the ponies for a canter in the field up the lane.  We had a lovely time but – as is now usual – it was very warm and we had to wash them off when we got back.

We them turned them out and naturally they wanted to roll.

I think they have invented a new sport – synchronised rolling. 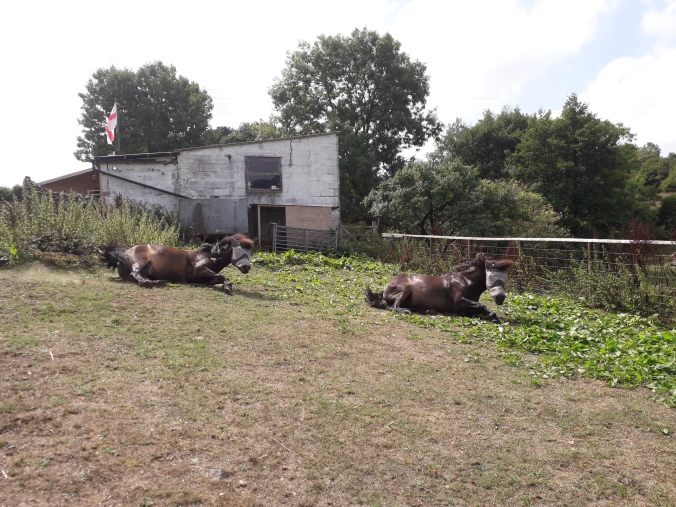 It was great fun watching them but of course the covered themselves in dust and as the vet was coming in the afternoon to give them their annual vaccinations we had to clean them off all over again.  It was worth it though!

Monday was a glorious day so Galahad and I went out for a hack.  The road was quiet, the birds were singing and everything was right with the world.

Until we came home.

We had to come down a narrow lane which is closed off by a hurdle at the top.  The hurdle needs lifting and really needs to be opened dismounted.  As it is a little awkward to manage I always seem to end up on the off side of the pony when I have closed the hurdle again.  Without much room to manoeuvre it is far easier to hop on from the wrong side and on Cookster I do that without thinking.

Never with Galahad though.  I tried it once at home and he panicked.  Partly because he isn’t used to it and partly because my muscles aren’t tuned enough to mounting from the wrong side so it isn’t as smooth as my mounting usually is.

On Monday I was feeling lazy and hopping up from where I was seemed a good plan.  After all, sometimes trec competitions ask for the rider to mount from the off side so practising is a good idea.  At least, that’s what I told myself.

It did not end well.  He shot off forwards when I was only half on.  I ended up in a patch of nettles minus my hat cover and with only one boot.  I had to paddle through the mud to find that – there is a spring at the top of the lane so it is wet all year round.

We were only about a hundred yards from the house so as I plodded home I was imagining the concern Galahad would cause when he careered into the yard witout me.  In the event, nobody saw him and I found him unconcernedly munching grass.  He was nicely decorated though!

Obviously mounting from the wrong side is something we can work on – especially if I want to be able to use it in a trec competition.  I will improve my own ability by practising on Cookster before I try it on Galahad again though!

After our busy day on Saturday, Sunday was wonderfully restful.

I had two lovely hacks, the ponies behaved well, the sun was shining and everything seemed right with the world.

My reward for riding and looking after Cookster – my sister’s pony after all – was to find him absolutely covered in mud.

At first I thought t was highly ironic that I was wearing my ‘Living the dream’ gilet.  Who dreams of spending their Sunday afternoon scrubbing mud off of a pony?  Especially one who is moulting.

However, as we pottered up the hill, I realised that actually it was an amazing day.  If anyone had told my twelve year old self that one day I would be able to spend a sunny afternoon playing with two ponies and riding them I would have been thrilled.  I really am living the dream.

The long expected Arctic blast is beginning to make itself felt here.  The temperature has plummeted but we have been having beautiful weather.

The ground has frozen nicely and we can walk over the top of the mud now instead of wading through it.  These footprints were made just the day before I took the photograph.

Our big rainwater tank is also now frozen enough to bear my weight.

It holds a lot of water and it needs to be pretty cold to do that.  It’s always one of the highlights of the winter if I can ‘skate’! 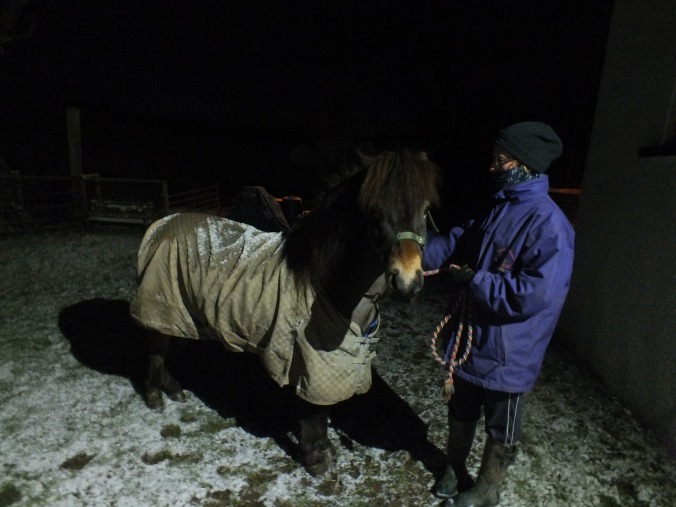 Yesterday we finally had some snow.  It may not be much compared to the rest of the country but we get so little of it down here that even a small amount is exciting.  I love snow!

It seems to have been raining solidly for the past few weeks and I have never known the ground to be so wet.  We will definitely not be schooling here anytime soon!

However, on Monday Galahad and I got out for a hack which was miraculously dry.  We got a little further afield than usual and found distinct signs that spring is on its way.

It’s hard to tell in the picture but there is a whole bank of snowdrops in front of Galahad. It was beautiful!

There have been primroses out since before Christmas and the snowdrops have been around for a while too but a bit further up the road we found daffodils and even some campion.

Then on Thursday morning I stepped out of the door to find the sky was a gorgeous blue and the birds were singing like crazy.  Make sure you have the sound on when you play the video!

It was a beautiful morning until the rain came back.  Definitely promising signs of spring though – it’s amazing how much better it can make one feel!

Right at the end of last winter Galahad pulled one of the surcingle buckles off of  his rug.  I didn’t fix it at the time because he stopped wearing it and I’m really rather lazy.

I finally got around to sewing on a new buckle (I never did find the original one) last week as Galahad is now wearing the rug again to keep his back muscles warm.  I was pretty proud of the job I did. 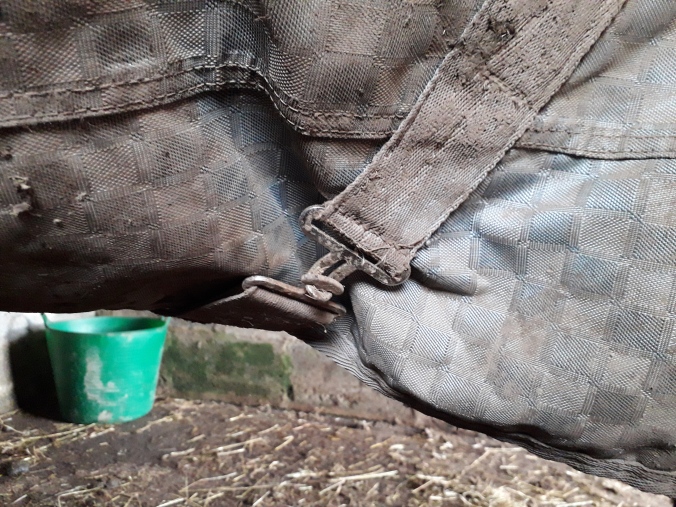 Unfortunately,  the hole in the new buckle is slightly smaller than the old one and as I hadn’t changed the other half of it I could not quite twist it closed.   It did stay done up though so I sent Galahad off in hopes that it would hold.

He hadn’t been turned out in a proper field for over a week and I think he enjoyed himself! 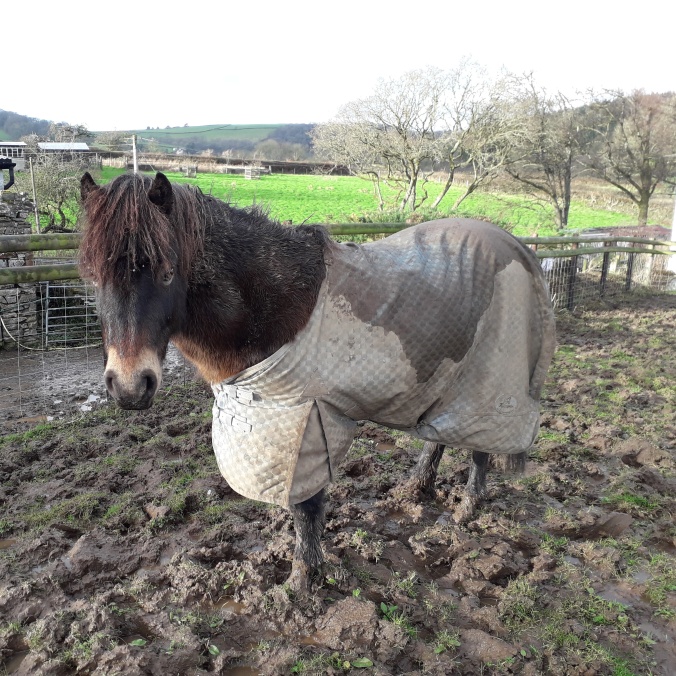 When I brought him in again the buckle had turned itself and was fully closed.  Which was great … except that I couldn’t get it open again – less than ideal.  I had visions of us having to cut Galahad free and I thought that at the very least I would have to replace the other half of the buckle.

Luckily my Dad managed to cut the rubber band off and although it was still very stiff I could at least open (and close) the buckle.  No more mending for me – until he rips it again!

For a few weeks now I have been thinking that it was time to give Galahad a haircut.  Specifically his tail – it might not be very thick but it does get rather long.

It is not technically correct to trim native ponies but that has never stopped me clipping him.  We don’t tend to show much anyway so it really doesn’t matter.  Besides, when it rains as much as it has done this last week this is the sort of thing that happens. 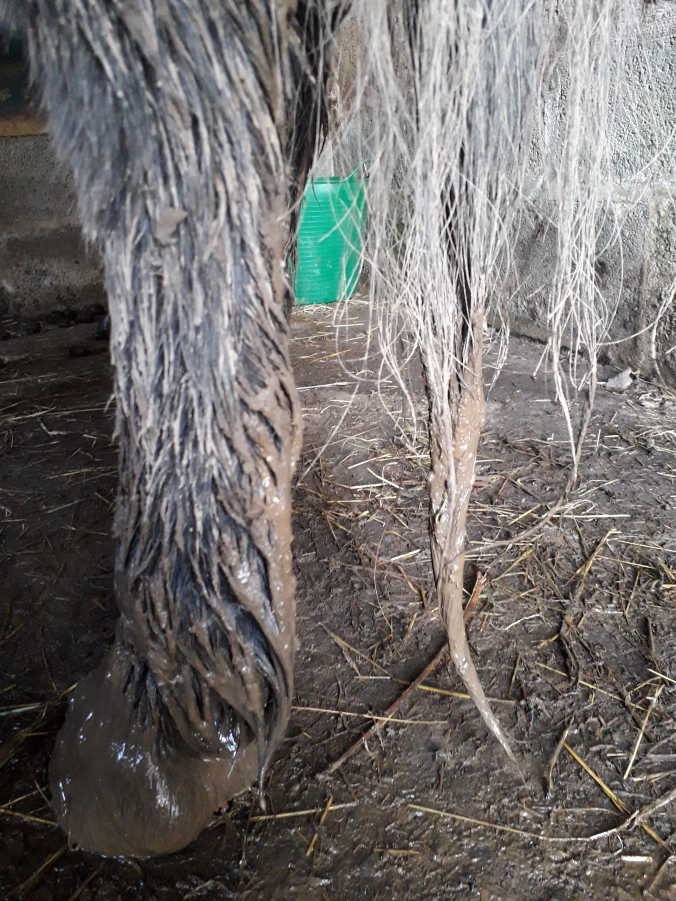 It can’t be particularly pleasant!

I didn’t want to wash the whole tail but I did clean off the ends before I trimmed them – the mud wasn’t just wet it was cold too.  Plus, clean hair is much better for the scissors!

Galahad looks much smarter now and I should think is more comfortable.  I seem to have neglected to take a picture of the finished product though – I wanted the hair to dry first so we went for our ride and I forgot all about it.  It was a lovely hack though, even if it was blowing a gale!